Tiger shows flashes of old magic at the Masters 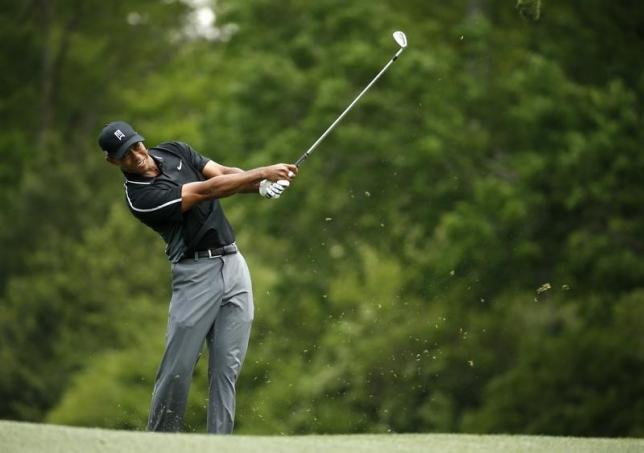 Tiger shows flashes of old magic at the Masters

AUGUSTA, GEORGIA - Tiger Woods, competing this week after a two-month absence to retool his game, showed flashes of his old magic as he fired his best score at the Masters in four years in Friday's second round. The former world number one has been under intense scrutiny after struggling badly with his chipping when last seen on the PGA Tour but he played solidly at steamy Augusta National to card a three-under-par 69. That left Woods at two-under 142, a distant 12 strokes behind pacesetting American Jordan Spieth but delighted to be in contention after working hard to resurrect his game. "I was at a pretty low one (point) in my career," Woods said after mixing four birdies with a bogey to climb into a tie for 14th when he ended his round. "To basically change an entire (swing) pattern like that and put it together, put it in a position where I can compete in a major championship like this is something I'm very proud of." Woods, who plunged to 111th in the rankings as he struggled to return to form following back surgery last year and his fifth swing change, again struggled with the pace of Augusta National's heavily contoured greens. "I had a hard time getting the ball close to the hole," said Woods. "You expect certain putts to roll out, but they're not rolling out." Watched by huge galleries, Woods made a fast start, hitting a superb approach to seven feet at the par-four first and rolling in the birdie putt as shouts of "Watch out, Tiger's back" and "Come on Tiger, let's go" rang out. His only bogey came at the par-three sixth, his tee shot ending up just off the back of the green from where he had 45 feet to the flag but hit a weak chip that advanced just 20 feet. Woods immediately rebounded in birdie-birdie style, draining a 25-footer at the tricky seventh and hitting his third shot at the par-five eighth to two feet. He birdied the 11th after conjuring a moment of magic from the pine straw to the right of the fairway, a soaring approach settling 12 feet from the cup. "I'm still right there," the 14-time major winner said of his position going into the weekend. "I'm 12 back, but there's not a lot of guys ahead of me. And with 36 holes here to go, anything can happen." - Reuters