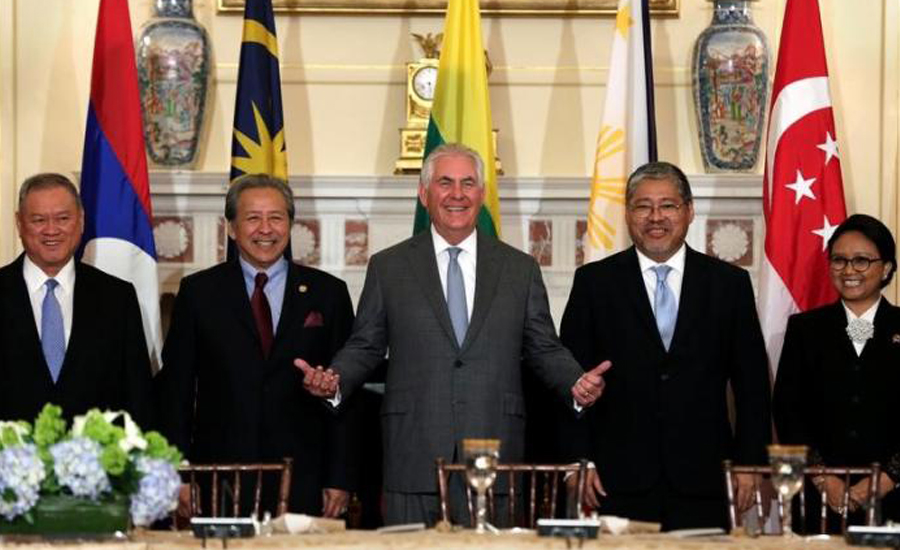 In his first ministerial meeting with all 10 members of the Association of Southeast Asian Nations (ASEAN), Tillerson also called on nations with competing claims in the South China Sea to cease all island building and militarization while talks aimed at creating a maritime code of conduct were under way.

Tillerson called on ASEAN countries to fully implement UN sanctions on Pyongyang, which is working to develop a nuclear-tipped missile capable of reaching the United States, and to show a united front on the issue, Murphy said.

"We think that more can be done, not just in Southeast Asia," he told reporters. "We are encouraging continued and further steps across all of ASEAN."

Last week, Tillerson called on all countries to suspend or downgrade diplomatic ties with Pyongyang, saying that North Korea abuses diplomatic privileges to help fund its arms programs. Tillerson also warned that Washington would sanction foreign firms and people conducting business with North Korea if countries did not act themselves.

All ASEAN members have diplomatic relations with North Korea and five have embassies there.

Murphy said Washington was not encouraging ASEAN states to formally cut ties, but to examine the North Korean presence "where it clearly exceeds diplomatic needs."

He said some countries were already doing this and also looking at the presence of North Korean workers, another significant revenue earner for Pyongyang.

Philippine acting Foreign Affairs Secretary Enrique Manalo, whose country currently chairs ASEAN, said of the US call to minimize relations with Pyongyahng, "We haven't really discussed that among the ASEAN countries, so that's probably something we will look at.

"Our immediate concern is to try and ensure the tension on the peninsula doesn't increase. ... The last thing we would like to see is to have a conflict break out due to some miscalculation," Manalo said.

Singapore's foreign minister, Vivian Balakrishnan, said sanctions would have to be fully implemented, but North Korea's presence in his country is already minimal.Asked if that could be further reduced, he said: "I won't say never, but at this point in time that's not the issue - we will stick with the U.N. Security Council's resolutions."

Balakrishnan, whose country signed the TPP, stressed the importance of US-ASEAN business ties - annual trade of $100 billion supporting half a million US jobs and $274 billion of US investment.

"Southeast Asia is replete with economic opportunities and it's too big to miss out on," he said.

His remark highlighted growing concern in Asia that Trump has ditched former President Barack Obama's economic "pivot" to the region by abandoning the TPP, something analysts say has led to more countries being pulled into China's orbit.

Murphy said Tillerson stressed that ASEAN remained a "very important ... strategic partner," which is shown by Trump's commitment to attend regional summits in the Philippines and Vietnam in November.

Washington wants ASEAN countries to crack down on money laundering and smuggling involving North Korea and to look at restricting legal business too.

It has been working to persuade China, North Korea's neighbour and only major ally, to increase pressure on Pyongyang. US officials are also asking China to urge more China-friendly ASEAN members, such as Laos and Cambodia, to do the same.

US efforts have included a flurry of calls by Trump to the leaders of the Philippines, Thailand and Singapore.

Diplomats say US pressure has caused some irritation in ASEAN, including Malaysia, which has maintained relations with Pyongyang in spite of the assassination of North Korean leader Kim Jong Un's estranged half brother at Kuala Lumpur International airport in February/

On the issue of the South China Sea, ASEAN has adopted a cautious approach recently, with a weekend summit avoiding references to China's building and arming of artificial islands there.

This stance coincided with moves by China and ASEAN to draft a framework to negotiate a code of conduct. Murphy said Tillerson had stressed that this process needed "room and space" through avoiding fortifying existing claims.

The United States has conducted freedom of navigation operations to challenge South China Sea claims, angering China, but not yet under Trump. Murphy said such operations would continue, but declined to say when the next might occur. -Reuters