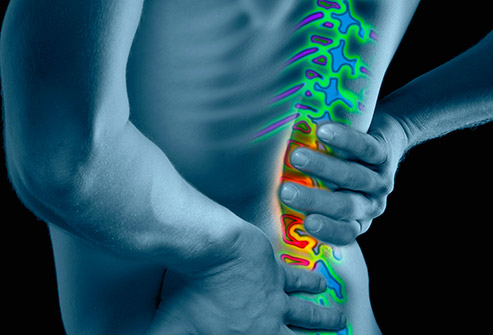 Factors that can trigger pain in the lower back include working in awkward positions, being distracted, and being physically or mentally tired, a new study shows. “Back pain is a major public health concern,” said Manuela Ferreira of The George Institute for Global Health at The University of Sydney, Australia, one of the study’s authors. “It’s among the leading causes of disability around the world.” Ferreira and her colleagues interviewed nearly 1,000 people who developed sudden lower back pain in 2011 and 2012, asking whether they'd been exposed to any of 12 possible triggers in the two hours before their pain started. Overall, people were most likely to have sudden lower back pain in the morning. Manual tasks involving awkward positions were tied to an eight-fold increase in risk for lower back pain, the researchers found. Manual tasks involving objects away from the body, animals or people, and unstable objects increased the risk of back pain between five and six times. Being distracted during a task or activity increased the risk of sudden lower back pain by 25 percent, they found. Being physically or mentally tired increased the risk about four times. There are some theories, however. For example, people may be at higher risk of back pain in the morning because they may not be fully alert yet. Or, Ferreira said, the disks in the spine might be more susceptible to damage in the morning. She said people who are used to lifting heavy objects probably know how to do it safely, but people should ask for guidance from doctors or physical therapists if they’re unsure. "Back pain will affect about 10 percent of the world’s population at some point in their lives," Ferreira and her colleagues wrote February 9 online in Arthritis Care and Research. “Although we have many studies looking at the interventions for back pain, we don’t have a lot of knowledge about prevention,” Ferreira said. “People who are not involved with these activities on a daily basis, they should pay attention to how they’re lifting,” she advised. “Even brief exposures to those activities can lead to back pain.” Also, she said, it helps to be physically and mentally strong, with a healthy diet and regular exercise. (REUTERS)