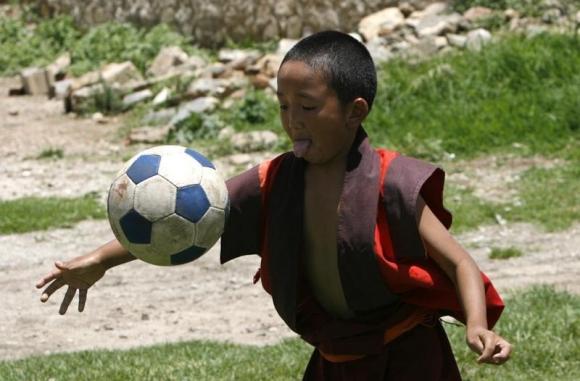 MUMBAI - The Himalayan kingdom ranked rock bottom in world soccer spirited another improbable win on Tuesday as Bhutan reached the second round of World Cup qualifying. Lying 209th in FIFA's rankings, Bhutan proved last week's 1-0 win over Sri Lanka in Colombo was no fluke with a 2-1 victory in the return leg in capital Thimpu. The tiny nation had allowed workers to leave early to catch the game, and the Changlimithang Stadium was packed to witness the heroics. Chencho Gyeltshen set the hosts on their improbable path in the fifth minute and fired in the second at the death to ensure only a fifth ever win for his side who were once beaten 20-0 by Kuwait in an Asian Cup qualifier in 2000. Bhutan were making their debut in a World Cup qualifying campaign since joining FIFA in 2000. India joined Bhutan in advancing to the next round of the road to Russia 2018 with a 0-0 draw in Kathmandu for an aggregate 2-0 victory over Nepal. Lowly East Timor followed up their 4-1 success over Mongolia last week with a 1-0 win in Ulaan-Baatar thanks to a lone strike from Patrick Fabiano in the ninth minute. Cambodia made last week's 3-0 home victory count against Macau to progress after a 1-1 draw in the return leg in the gambling enclave. Brunei, ranked 198th by FIFA and the second lowest in Asia, had made Tuesday's home leg free for fans to attend after defeating Taiwan 1-0 away. But Wang Ruei's strike in the 37th minute and a goal from Chu En-le just after the break gave Taiwan a 2-0 win and a 2-1 aggregate victory, much to the disappointment of the home crowd in Bandar Seri Begawan. Pakistan's World Cup qualifier at home to Yemen was postponed and will be switched to a neutral venue after Sunday's suicide bombings at two churches killed 14 people and injured nearly 80. Their opponents had already arrived in Lahore for the match after beating Pakistan 3-1 in the first leg which was played in Doha due to security concerns in Yemen. The six aggregate winners will move into the second round of the Asian World Cup campaign, which doubles as the qualifiers for the 24-team 2019 Asian Cup, where the likes of regional powerhouses Japan, Australia and Iran enter the fray. - Reuters