RAWALPINDI (92 News) – DG ISPR Maj Gen Asif Ghafoor has said that Karachi at one point in 2014 was 6th in World Crime Index, but Alhamdulillah today it is at 70th with many first world cities behind. In a tweet, he said that credit goes to the team of civil administration and security forces, especially Intelligence, police, Sindh Rangers and citizens of Karachi. “More stability will be witnessed in future Insha Allah,” he hoped.Upload Files 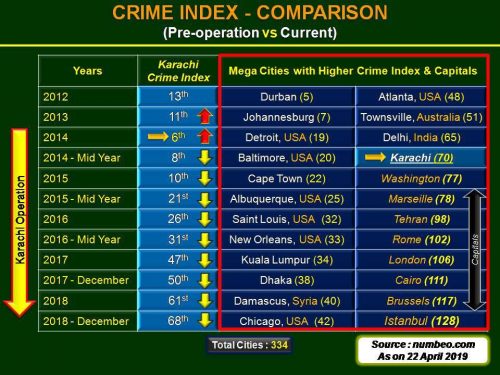 After Indian External Affairs Minister Sushma Swaraj’s confession, Inter-Service Public Relation (ISPR) Director General Maj Gen Asif Ghafoor said that finally truth underground reality compulsions. In his tweet on April 17, the ISPR director general said that underground realities made force India to speak the truth. “Finally the truth under ground reality compulsions. Hopefully, so will be about other false Indian claims ie surgical strike 2016, denial of shooting down of 2 IAF jets by PAF and claim about F16. Better late than never,” Maj Gen Asif Ghafoor tweeted. The DG ISPR also shared the story of Indian media, in which, Sushma Swaraj confessed her fake claims about Balakot attack. Indian newspaper ‘Times of India’ reported that BJP leader Sushma Swaraj said no Pakistani soldier or citizen died in the air strike carried out by the Indian Air Force across the border in response to the Pulwama terror attack in February. Addressing women party workers here, she stressed on a 2014-like full majority BJP-led government this time also, saying former prime minister Atal Bihari Vajpayee could not do everything which he wanted to because he was heading a coalition administration.

On April 11, a group of international media journalists mostly India-based and ambassadors and defence attachés of various countries in Pakistan visited impact site of the February 26 Indian air violation, near Jabba, Balakot.

According to a press release, the DG ISPR briefed the group about details of the event negating repeated false Indian claims with ground realities. Visitors were shown bomb craters of denied Indian air strike attempt in barren open spaces with no loss to life or infrastructure.