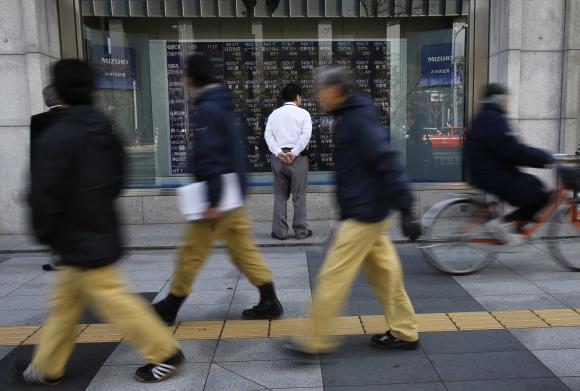 SYDNEY (Reuters) - Japanese shares touched an eight-year high on Monday following a record close on Wall Street, with investors cautiously optimistic the European Union would make progress this week on a debt deal with Greece. Oil prices faded after an early spurt, while the major currencies stayed locked in recent tight ranges and European bourses were expected to start with only minor moves. Data from Japan showed the economy emerged from recession in the final quarter of last year, though growth of 0.6 percent was short of market forecasts. Investors still seemed encouraged and the Nikkei .N225 firmed 0.5 percent to reach its highest since 2007. MSCI's broadest index of Asia-Pacific shares outside Japan .MIAPJ0000PUS recouped a small initial loss to inch ahead 0.1 percent to 483.90. The index boasted its highest close since late October on Friday but is bumping up against a major band of chart resistance in the 484 to 486 area. Australia's main index .AXJO nudged up 0.2 percent, as did shares in Shanghai .SSEC. Holidays will be a feature this week with the United States off on Monday and much of Asia celebrating the Lunar New Year. China's markets are off from Feb. 18 right through to the 24th. The Eurogroup of finance ministers meets in Brussels later Monday to try to find common ground with Greece's new government, in talks that could drag on for some time. Greece said on Sunday it was confident of reaching agreement in negotiations with its euro zone partners, but reiterated it would not accept harsh austerity strings in any debt act. Markets have generally assumed a compromise would eventually be found, given the alternative might be a disastrous Greek exit from the euro. The S&P 500 ended at a record high on Friday, as energy shares gained with oil prices, while the Nasdaq hit a 15-year peak helped by technology stocks.