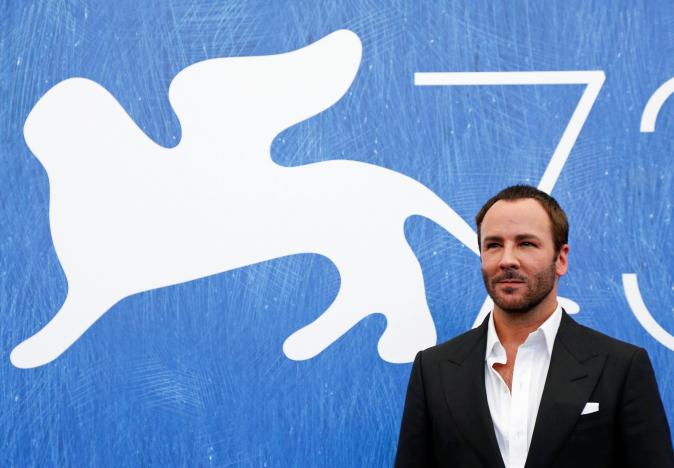 VENICE – After a seven-year hiatus, Tom Ford is back to film making with thriller "Nocturnal Animals" premiering at the Venice Film Festival on Friday, and the busy fashion designer promises he will be back much sooner next time.
"I opened a hundred stores, I had a child, life sort of took over and I didn't find the right project for a few years," Ford told Reuters on the sidelines of the festival. "So, hopefully three more years until the next one and not seven." The movie showing in Venice, which stars Amy Adams as an art gallery owner troubled by her ex-husband's novel she receives in the mail after years of silence, is a cautionary tale about coming to terms with the choices we make in life. "It's really about finding those people in your life that mean something to you and holding onto them," the director said. "Loyalty is something that is certainly a theme in my personal life ... I don't let go of people when they are wonderful so that to me is what this is about." The thriller is one of 20 movies competing for the Golden Lion that will be awarded on Sept. 10 at the world's oldest film festival, once again seen as a launch pad for the Oscar season after premiering several winners in its last three editions. "Nocturnal Animals" is only the second film from the 55-year-old designer-turn-director, whose first foray into directing was in 2009 with "A Single Man", about a gay college professor who loses his longtime partner, which also premiered in Venice and earned its star Colin Firth an Oscar nomination. Friday's thriller opens with a set of plump middle-aged burlesque dancers all but naked in front of red velvet curtains, which Ford said rather than being an image of "exaggerated, overfed, ageing" America becomes a metaphor for one of the movie's themes. "These women were so beautiful, they were so free ... it's about letting go of what you think you're supposed to do, how you think you're supposed to be and actually becoming your true self," the American-born director told a news conference. The color red recurs throughout the film and was also what Ford chose for the script he sent to his actors, including Jake Gyllenhaal who plays Adams' ex-husband. "There was something about that that resonated with me as I was reading it, it's pervasive in the story telling, there is blood, there is heart," the actor said. "It was sort of beating at me and left me shaking not only in the story telling but also just having read it off a red page." –Reuters