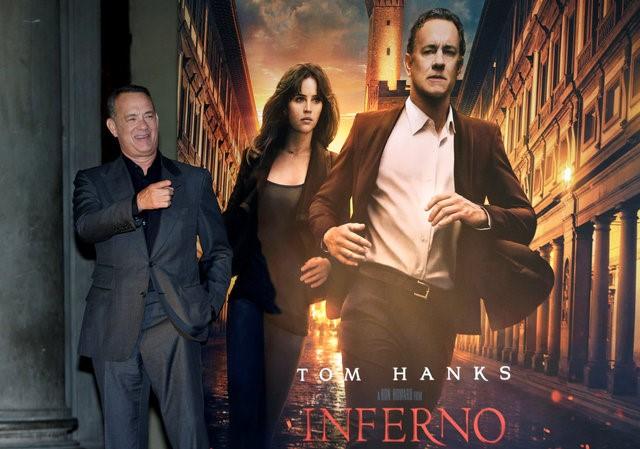 LOS ANGELES - Actor Tom Hanks said the real draw for him to reprise his role as fictional symbologist Robert Langdon in the film adaptation of Dan Brown's thriller "Inferno" was the chance to be "the smartest guy in the room." "You give me the right amount of verbiage and just enough time to do the right amount of research, and I can convince you that I may be the smartest guy in the room," the actor said with a laugh to reporters on Thursday. "The gift that Dan Brown gave me as an actor is to play a guy who's always curious, who's always opinionated and who's always searching for an answer." Hanks joined cast members including Felicity Jones and Irrfan Khan, director Ron Howard and author Brown at a news conference for the film in Florence's Palazzo Vecchio. Hanks and Howard previously brought Brown's "Da Vinci Code" and "Angels and Demons" to life in hit blockbuster films. Sony Pictures' "Inferno," due in theaters on Oct. 28, follows Langdon as he wakes up in Florence with amnesia and has to decipher clues to stop a plague being released by an elusive billionaire who tries to tackle overpopulation. Hanks said the film's take on overpopulation suggests "we are creating our own version of Dante's inferno here in the real world." He added that there were places in the world where "the environment is hellacious and the people are held in slavery and there is any numbers of degrees of misery that are in fact created by ourselves one way or another." Much of the film showcases Florence's historic buildings and piazzas, as Langdon speeds through the city's rich history, solving riddles related to Florentine poet Dante Alighieri's famed 14th century saga "Divine Comedy," about a man's journey through 'Inferno,' or hell. Brown said framing Dante as prophecy and not as history made the story relevant to a modern audience, drawing threads between overpopulation and real world issues such as immigration or lack of natural resources. Director Howard said he was inspired by the powerful imagery of Dante's "Inferno" and how it has resonated through centuries and generations. -Reuters