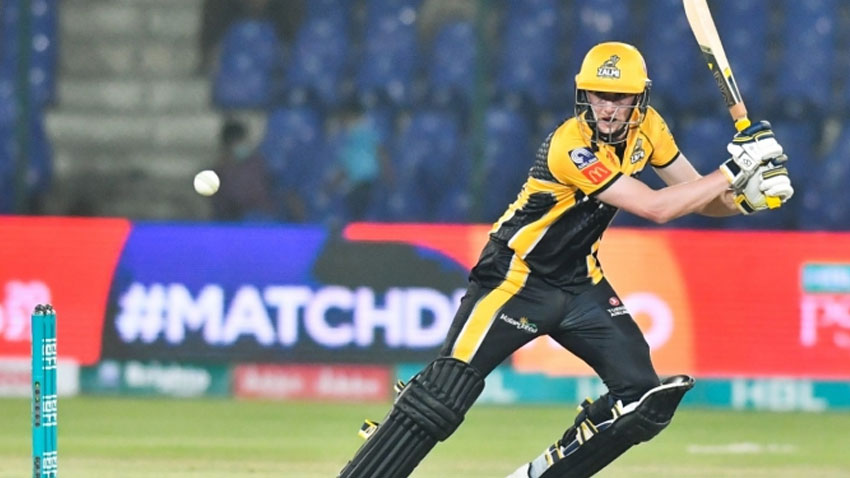 KARACHI (92 News) - Debutant Tom Kohler-Cadmore half-century and quick-fire 24 not out from Haider Ali led Peshawar Zalmi to an exciting six-wicket win over Multan Sultans in the fifth match of the HBL PSL 6 at Karachi’s National Stadium on Tuesday.

Tom, who featured for Quetta Gladiators in the third edition, replaced his countryman Liam Livingstone in Peshawar Zalmi just before the start of this year’s edition. The right-handed batsman top-scored with 53 off 32 balls, laced with six fours and a six.

Chasing 194 to win, Zalmi got off to a solid start as openers Kamran Akmal and Imam ul Haq made full use of the powerplay posted 56 for no loss. It was leg-spinner Usman Qadir, who broke the opening partnership in his very first over, seventh of the innings, when he bamboozled Kamran with a googly and trapped him LBW. Kamran had started to look threatening as he struck Shahid Afridi for a six and a four in the previous over. The wicketkeeper-batsman smashed five fours and two sixes in total in his 37 off 24.

After the departure of Kamran, Imam was joined by Tom, who announced his arrival by hitting Afridi for back-to-back boundaries in the eighth over of the innings. Tom was equally supported by Imam, who kept the scoreboard moving as Zalmi brought up 100 at the end of 11th over.

After the departure of Imam (48 off 39, five fours) and Tom (53 off 32, six fours, one six), Zalmi were in a spot of bother, requiring 34 from three overs. An experienced Shoaib Malik was joined by young Haider and both batsman got Zalmi home with one over to spare.

Haider played a sensational knock, smoking two sixes - the last one of them sealing the match - and as many fours to post a brilliant eight-ball 24.

Shoaib returned undefeated on 11 off five.

Earlier, after being put into bat, Multan Sultans posted a momentous 193 runs on the board despite losing Chris Lynn in the second over of the match for one.

James Vince joined his captain Mohammad Rizwan at the crease when scoreboard was reading six for one. Once both batsmen got together, they played shots with ease. Wicketkeeper-batsman Rizwan, who is representing and leading Sultans for the first time in HBL PSL 6, struck three fours and two sixes in his knock of 41 from 28 balls. Before falling to Mohammad Imran, Rizwan had contributed an 82-run stand for the second wicket.

Vince continued to play his shots all around the ground, and brought up his third HBL PSL fifty in the 15th over of the innings off just 39 balls. He got an able partner in Sohaib Maqsood, who coming to bat at number four kept the scoreboard moving, and both batsmen were treat to watch as they brought up 50-run stand off just 29 balls.

Both batsmen collected 48 runs from overs 14 to 16, before Sohaib fell to Saqib Mahmood in the 17th. Sohaib scored 36 off 21 balls, which included four fours and two sixes.

That Sultans were able to post an imposing total was largely because of Vince’s 84 off 55, which included nine fours and three towering sixes. Rilee Rossouw scored unbeaten 14 off eight balls, hitting a four and a six.

For Peshawar Zalmi, right-arm fast Mahmood was the most successful bowler with two wickets for 36.