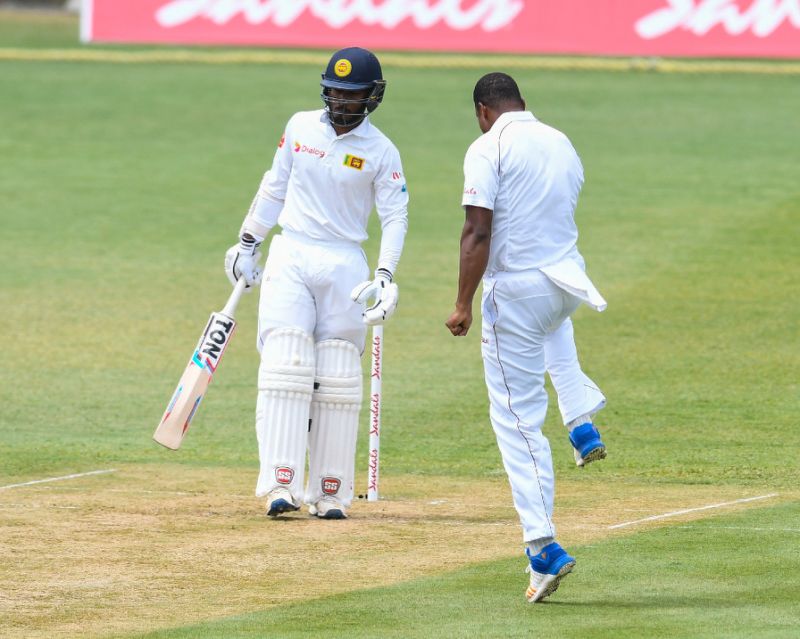 CASTRIES (AFP)- Dinesh Chandimal's battling, unbeaten hundred defied a West Indies attack spearheaded by Shannon Gabriel as Sri Lanka were lifted by their captain to a first innings total of 253 on the opening day of the second Test at the Darren Sammy Stadium in St Lucia. West Indies openers Kraigg Brathwaite and Devon Smith negotiated two overs before the close of play safely and will resume the home side's reply at two without loss on the second day.
It looked for most of the day that Gabriel, the burly fast bowler who finished with the impressive figures of five for 59, would claim individual honours outright. But Chandimal, badly missed by Smith at slip off Miguel Cummins when only on 14, grew in confidence and resolve to finish on 119 not out, his 11th Test century and surely one of his most invaluable. He got good support from the lower-order, especially Kasun Rajitha, the fast-medium bowler who was one of two debutants in a Sri Lankan side showing four changes from the team comprehensively beaten by 226 runs in the first Test in Trinidad. Most controversial of the changes was the omission of veteran left-arm spinner Rangana Herath, although it was not clear if his omission was because of poor form or, as the selectors had hinted prior to the series, that he would be rested from one of the three matches. Chandimal's innings spanned five hours and occupied 186 deliveries with ten fours and one six. It represented a significant reversal from his performance on the final day of the first Test four days earlier, when an ugly leave at off-spinner Roston Chase triggered Sri Lanka's second innings collapse. Like the Sri Lankan captain, Gabriel also received good support in the latter stages of the innings on a pitch offering considerable assistance to the fast bowlers. Kemar Roach, the senior man in terms of experience in the West Indies bowling line-up, claimed four for 49, including three of the final four wickets to ensure that the tourists were still left dissatisfied with their final total, especially as Chandimal made the decision to bat first. - '10-year' misery for Udawatte - Gabriel's pace and hostility, reminiscent of his early bursts in both innings on the first Test, again caused great discomfort to Sri Lanka's top order and he was swiftly among the wickets in accounting for debutant opener Mahela Udawatte and returning middle-order batsman Dhananjaya De Silva. New ball partner Roach accounted for Kusal Perera in his second spell of the morning. Playing his first Test ten years after his one-day international debut, which was also against the West Indies in the Caribbean, Udawatte endured the misfortune of repeating the experience of a decade ago in being dismissed for a duck. Gabriel took the outside edge of his bat to the second delivery he faced for Holder to take a superb catch at third slip. De Silva, who arrived in the Caribbean only last week due to the death of his father two weeks ago and therefore missed the first Test, suffered an elbow injury when he was struck on the arm by the fearsome Gabriel with the ball ricocheting onto the stumps. Scans revealed bad bruising but no fracture. Mendis joined Kusal Perera and the pair counter-attacked briefly with Perera striking Holder for three consecutive fours. Such aggression could not last though and Holder again showed a safe pair of hands in the slip cordon to account for Perera for 32 off the first ball Roach bowled coming back into the attack. Wickets continued to fall around Chandimal through the afternoon but just as it looked as if they would fail to cross the 200-run mark, the tailenders showed courage in support of their captain, taking a few blows on the body to give the senior man a chance to reach a noted landmark and give themselves something to try to defend on day two.