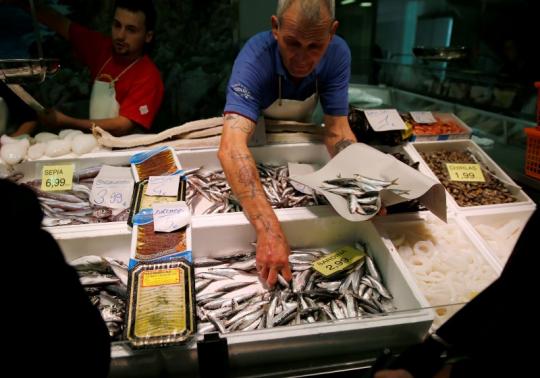 SAN SEBASTIAN - Top chefs from around the world gathered in the north of Spain on Tuesday to launch a campaign to eat more small fish such as anchovies in the interests of feeding more people and reducing pressure on the world's oceans. Eating fish such as sardines and herring directly rather than processing them as fish meal to feed farmed salmon, pigs and chickens is a more efficient way of using protein, says non-profit ocean conservation organization Oceana, which started the campaign. Chefs including Brett Graham of two-Michelin-starred The Ledbury in London and Peruvian celebrity chef Gaston Acurio attended the event in San Sebastian, the capital of the northeast Basque region and one of the cities in the world with the most Michelin stars. The chefs have committed to serve anchovies and other small fish at their restaurants starting on World Oceans' Day on June 8. "We can feed tens of millions more people if we simply eat anchovies and other forage fish directly rather than in form of a farmed salmon or other animals raised on fish meal and fish oil," said Andy Sharpless, chief executive officer of Oceana. The United Nations Food and Agriculture Organization estimates 37 percent of all marine fish caught worldwide are processed into fish mean and fish oil. – Reuters