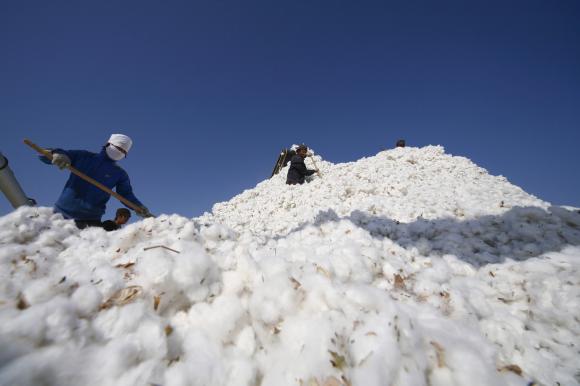 BEIJING (Reuters) - China's top cotton producer, a quasi-military body formed 60 years ago to settle the far west Xinjiang area, is resisting a government policy that could force it to cut output in an industry employing hundreds of thousands in the restive region. Beijing has pledged to end a costly stockpiling program that has artificially inflated cotton prices and in Xinjiang helped underpin an influx of Han Chinese workers, creating friction in an area home to the Muslim Uighur people. Reluctant to accept the current weak market price, the Xinjiang Production and Construction Corps (XPCC) has asked the government to buy part of its crop and store it in state reserves, said two trade sources with knowledge of the issue. XPCC, also known as the army corps, or 'bingtuan', has become a sort of state within a state and gained a dominant role in industries such as cotton, where it employs about 200,000 mainly Han Chinese on some of Xinjiang's best land. "Cotton is intimately associated with land usage, ownership, employment and Han in-migration. It's all tied up," said Tom Cliff, a scholar at the Australian National University. Beijing has promised subsidies to help cushion the impact of ending stockpiling, but the total amount is unclear and with the local cotton price plunging any threat to the industry could be a fresh source of competition for jobs. Employment discrimination, experts say, along with a demographic shift that many Uighurs feel is diluting their culture, is fuelling resentment that spills over into violent attacks directed at Han Chinese, China's majority ethnic group. China denies that Uighurs are unfairly marginalized, and says it is addressing underdevelopment and lack of jobs in heavily Uighur areas such as southern Xinjiang. Beijing has also pledged to invest billions of dollars in textile factories in Xinjiang, in the hope of creating 1 million jobs by 2023, but there are concern that Uighurs could be overlooked for many of the jobs. AGRICULTURAL REFORM China's National Development and Reform Commission (NDRC), which is leading agriculture reform, reiterated in January it would stick to plans to end stockpiling and let the market dictate demand. Beijing previously acquired almost all of China's cotton at high prices and then auctioned it off to textile firms. But it incurred huge costs and left masses of fiber unsold in reserves. Its new policy has already caused prices to plunge and some experts say that a subsidy - a replacement for stockpiling - will not be enough to encourage farmers to keep growing. NDRC could not immediately be reached for further comment. XPCC, which produces almost 30 percent of China's cotton, has been keeping its prices at least 500 yuan ($80) per ton higher than other ginners, limiting sales. "Normally they (XPCC) have sold everything by March. But now they're out of the market and not competing," said one of the China-based trade sources, who spoke on condition of anonymity. This means the group may have to slash its price later in the season if the state doesn't intervene, putting pressure on benchmark local prices that have already lost a third of their value since September. This could also weigh on international prices, with the market counting on demand from China to support prices that last month traded near 5-1/2 year lows. XPCC did not respond to a fax seeking comment on its slow sales to date and its stance on state buying. But Liang Dongya, general manager of XPCC's cotton and jute division, told a conference last month the group had sold less than 400,000 tonnes of a 1.76 million ton crop at end December He said the poor sales should not be blamed on high prices, but were due to a "very serious" reduction in demand. "MAINTAINING SOCIAL STABILITY" The US Department of Agriculture expects China'a cotton consumption to be 7.7 million tonnes in 2014/15 but some believe it could be as low as 6.5 million tonnes. Production, on the other hand, is seen between 6.2-6.5 million tonnes and, with about 1.5 million tonnes of fiber likely to be imported, bulging stocks may grow further. The status of XPCC gives it substantial lobbying power so even if it accepts the agriculture reforms it is likely to push for more subsidies. Highlighting its stature, a cabinet paper last year said the group continued to play a big role in promoting "unity among ethnic groups and maintaining social stability" and it also accounted for more than 17 percent of Xinjiang's GDP in 2013. "The bingtuan was born and raised on preferential policies, and I can't see them letting them go without a struggle, or some quid pro quo," said Cliff of the Australia National University.