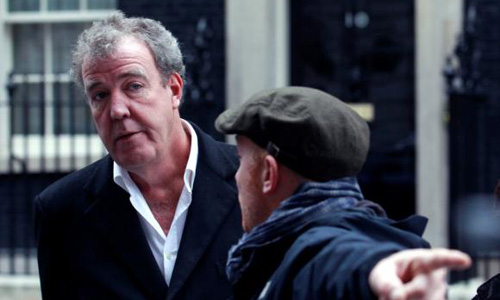 LONDON - Jeremy Clarkson, the outspoken British presenter of the "Top Gear" motoring show, has been suspended by the BBC after he was involved in a "fracas" with a producer. Clarkson, who has generated both controversy and profits for Britain's publicly funded broadcaster, was already on a final warning over accusations last year that he had used racist language while filming the show. "Following a fracas with a BBC producer, Jeremy Clarkson has been suspended pending an investigation," the broadcaster said in a statement on Tuesday. "No one else has been suspended." The BBC said Top Gear, which is aired in more than 200 countries, would not be broadcast on Sunday. A friend of Prime Minister David Cameron, Clarkson became the popular face of Top Gear by mixing a passion for cars with blunt banter and swagger that offended, among others, environmental groups, mental health charities and cyclists. Clarkson was called before BBC bosses last year after a British newspaper reported he had been heard using the word "nigger" as he recited an old version of the rhyme "Eeny, Meeny, Miny, Moe" to choose between cars in filming two years earlier. The 54-year old presenter later apologized for any offence caused by the reports about the use of the word. He wrote in his Sun newspaper column in May that he had been told by the BBC that if he made "one more offensive remark, anywhere at any time, I will be sacked". But he was back in hot water in October when the show sparked a diplomatic incident between Britain and Argentina, two countries which went to war in 1982. A Top Gear television crew was forced to flee Argentina after driving a Porsche 928 GT with the registration number H982 FKL - which some people suggested could refer to the Falklands conflict. Despite or even because of years of controversy, however, Top Gear has become one of the BBC's most successful and lucrative programs. It was even recognized by Guinness World Records as the most-watched factual television show of all time. The BBC said it would say nothing further on the matter and Clarkson could not be reached for comment. His manager and his assistant did not immediately return calls requesting comment. – Reuters