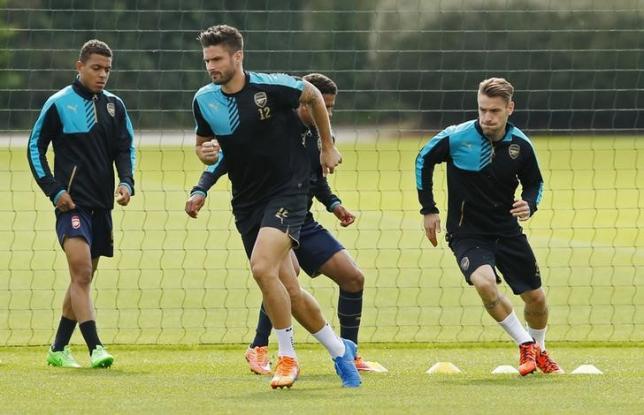 LONDON - Arsene Wenger may be in the spotlight after Arsenal's Champions League traumas but his side can go level on points with leaders Manchester United by beating them on Sunday while Liverpool boss Brendan Rodgers takes his side to rivals Everton. After another series of mixed results in the Champions League, the Premier League's leading clubs will find themselves under close scrutiny this weekend. Two of them are thrown together when fourth-placed Arsenal can join United on 16 points by beating them at the Emirates (1500 GMT). That would almost certainly leave Manchester City back at the top as long as they do not suffer a shock home defeat by struggling Newcastle United on Saturday (1400). Arsenal will be expected to recall goalkeeper Petr Cech after his deputy David Ospina conceded an own goal in a shock 3-2 home defeat by Greek side Olympiakos Piraeus on Tuesday, their second straight European reverse. They will face a United side who have scored nine goals in three successive league victories -- three of them by young prodigy Anthony Martial -- to go top for the first time under Louis van Gaal. Neighbours City, in contrast, have slumped to successive league defeats by West Ham United and at Tottenham Hotspur, having been strong favourites for the title after winning their opening five games. However, their spirits were lifted by their late 2-1 win over Borussia Moenchengladbach in Europe on Wednesday. Now a point behind United, they will be expected to see off Steve McClaren's Newcastle despite the latter's improved performance last Saturday, which should have brought a win instead of a 2-2 draw at home to champions Chelsea, who are down in 14th place. Conceding two late goals meant that Newcastle still have only their local rivals Sunderland beneath them at the bottom of the table, neither side having yet won in the 14 games between them. To break their duck, Sunderland must end a remarkable run of away victories by West Ham, who have won at Arsenal and Liverpool as well as City. Aston Villa are the other team in the relegation places going into the eighth round of matches, when they will be looking for a first home win, against the team one place above them, Stoke City on Saturday. Chelsea, already beaten three times in the league and coming back home after a 2-1 Champions League defeat at Porto on Tuesday, need to start winning again. Their three defeats are already as many as in the whole of last season's title success, and they need to revive their flagging fortunes at home to Southampton on Saturday. For the Merseyside derby on Sunday lunchtime, home team Everton will have had the benefit of a clear week's preparation. Yet neighbours Liverpool, whose inconsistent start to the season has left them ninth in the table and heaped pressure on boss Rodgers, will have to recover from Thursday's Europa League match against FC Sion. -Reuters