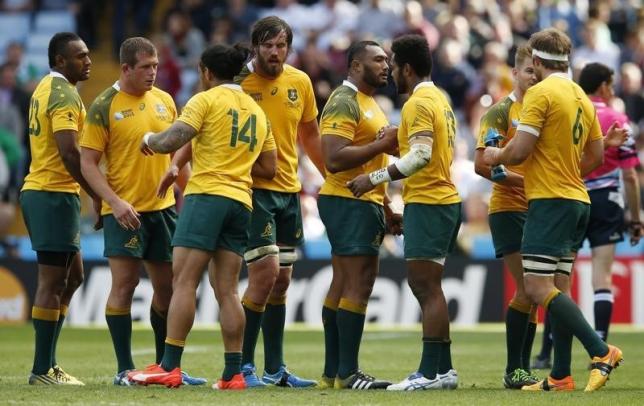 LONDON - For all talk of the narrowing gulf between the top nations and Rugby World Cup stragglers, Australia, Ireland and Scotland all picked up maximum points on Sunday as they set their sights on the business end of the group stage. A second-string Wallabies side ran 11 tries past minnows Uruguay in what amounted to little more than a warm-up for their crunch encounter with hosts England on Saturday. Two tries in five minutes from winger Drew Mitchell was the highlight as Australia moved to the top of Pool A ahead of a Twickenham contest that could consign England to an unprecedented group-stage exit after losing to Wales the previous day. Bonus points could yet come into play if Fiji spring a surprise against Wales on Thursday, but that was far from the mind of Australia coach Michael Cheika after Sunday's romp established the Wallabies as the tournament's top try scorers. "No one's won the World Cup unless they've won every game. I've never been here before, but I figured that's what you've sort of got to do," Cheika told reporters. "I'm not being a smart Alec, our plan is not to just scrounge through, we've got to just play well every game and let the results take care of themselves." Scotland also made it two from two, regaining their spot at the top of Pool B by clocking up five late tries to turn around a first-half deficit against a physical United States. Trailing 13-6 at the break, the Scots found their composure in the second half to claim the bonus point that could prove crucial in a group that contains South Africa, Samoa and Japan. "It was a tough team talk at halftime," Scotland captain Henry Pyrgos said after the match. "Obviously the USA played really well in that first half, but we weren't clinical enough, we made a lot of mistakes and put ourselves under pressure. "But credit to the boys, we came out in the second half and got a try straight away, which settled the nerves and allowed us to kick on and ultimately we got the five points." Worryingly for Scotland, however, playmaker Finn Russell limped off midway through the second half -- a potentially heavy blow if he were to miss next Saturday's clash with South Africa in Newcastle. South Africa have also been dealt an injury blow, with captain Jean de Villiers retiring from international rugby after breaking his jaw in the game against Samoa. In Sunday's late game, Ireland wore down a dogged Romania to claim a comfortable 44-10 bonus-point victory in front of a record 89,267 crowd at Wembley, surpassing the tournament best set at the same stadium last week. The Irish started with the oldest team in World Cup history; experience that helped them to take full advantage when Romania centre Csaba Gal was sent to the sin bin. Ireland proceeded to cut loose in the second half, ensuring maximum points from their opening two matches and a slim advantage over France in Pool D, though Joe Schmidt was quick to warn against complacency ahead of their next match against a desperate Italian side. "Italy we be a whole different kettle of fish. They know that their tournament hinges on our game next Sunday ... and we know it hinges a bit for us as well, so that is going to be a massive challenge," Schmidt told reporters. Off the pitch, Argentina lock Mariano Galarza lost his appeal against a nine-week suspension for eye-gouging during the Pumas' opening Pool C game against New Zealand and will miss the rest of the tournament. -Reuters