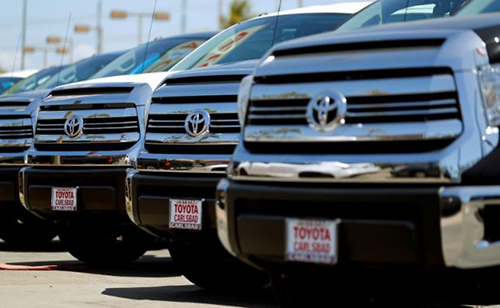 WASHINGTON – Toyota Motor Corp (7203.T) said on Friday it had told its US dealers to disclose, at the time of sale, the identity of vehicles with defective Takata air bag inflators that will be subject to recalls by 2018. After criticism by members of Congress, the automaker made public a list of vehicles with inflators subject to future recalls. They include the 2016 Toyota 4Runner and Lexus GX460 still in production. Dealers may also have in stock new 2015 Lexus IS250C/350C and Scion xB, and the 2015 Lexus GX460 and Toyota 4Runner, the company said. Takata inflators can explode with excessive force and spray metal shrapnel. They are suspected in 13 deaths worldwide and more than 100 injuries. Last month, Takata (7312.T) agreed to declare as defective, by 2019, another 35 million to 40 million US inflators that lack drying agents in frontal airbags. To date 15 automakers have announced recalls of 16.4 million vehicles and worldwide nearly 100 million inflators have been declared defective. This week, Senator Bill Nelson, a Florida Democrat, urged automakers to fix the vehicles before sale or at a minimum disclose the issue before people buy cars. Nelson praised Toyota, calling the announcement "a positive step for consumers. While I still think automakers shouldn’t be selling vehicles with defective airbags, at the very least car buyers should know they’re purchasing a vehicle that will be subject to a future recall.” US Transportation Secretary Anthony Foxx said at a Senate hearing on Wednesday that he agreed automakers should make the disclosures but said he lacked the legal authority to require them. Last week, a report from Nelson said Toyota said it would produce 175,000 US vehicles with air bag inflators that would be subject to recalls by July but did not disclose the vehicles. The report also said Fiat Chrysler Automobiles NV (FCHA.MI), Volkswagen AG (VOWG_p.DE) and Mitsubishi Motors Corp (7211.T) are also still selling new vehicles with defective air bags that will eventually need to be recalled. The vehicles are legal to sell but must be recalled by 2018. The NHTSA said there have been no ruptures in any vehicles built since 2008. According to the NHTSA, the vehicles do not become vulnerable to exploding airbags without long-term exposure to high humidity. In the short-term, the agency says, they are safe to drive - and much safer than the older models. –REUTERS