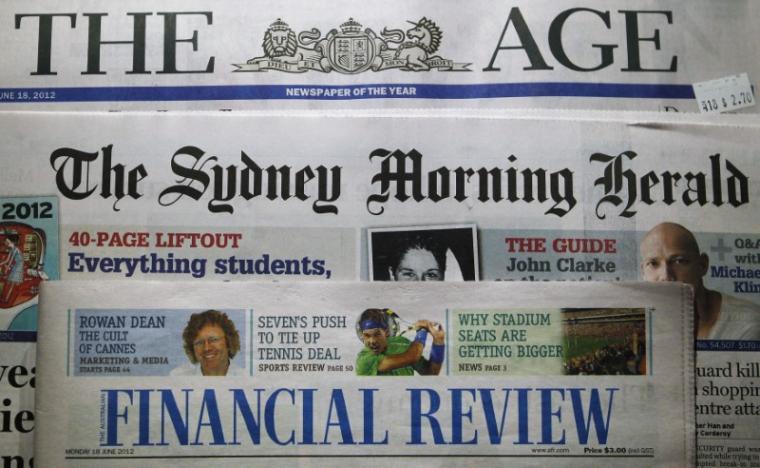 SYDNEY - US buyout firm TPG Capital Management on Monday raised its cash bid for Fairfax Media Ltd, offering A$2.76 billion ($2.04 billion) for the struggling Australian publisher and sending its shares to a six-year high.

The fresh offer from TPG and partner Ontario Teachers' Pension Plan Board (OTPP) would allow shareholders to cash out completely rather than leaving them with scrip in a piecemeal collection of small assets including radio, regional newspapers and television streaming.

"It’s better to have a complete bid," said John Grace, co-head of equities at Ausbil Investment Management, Fairfax's largest shareholder with a 7.8 percent stake. He added however that it was too early to say whether the bid should succeed.

Fairfax is the publisher of The Sydney Morning Herald and The Australian Financial Review, but its best-performing asset is property listings website Domain, which has boomed amid the long-term decline of newspaper earnings.

TPG is now offering A$1.20 a share for the entire business, compared with the prior offer of A$0.95 a share for Domain and top mastheads.

It represents a 12 percent premium to Fairfax's A$1.07 closing price on Friday and sent the shares up as much as 8.4 percent to a six-year high of A$1.16 on Monday.

The previous offer did not include the publisher's radio division, regional and New Zealand titles, a stake in an online television streaming start-up and its debt.

Long-suffering shareholders had pinned their hopes on Fairfax's plan to spin off Domain as it continues to cut costs at its newspapers. Many of its journalists this month went on strike for a week to protest editorial job cuts.

Fairfax has said it is considering the TPG proposal - which is subject to a shareholder vote and foreign investment approvals - but is also continuing to progress preparations for the planned separation of Domain.

"While the revised offer is clearly superior in that is an offer for the entire company, TPG may need to offer more than A$1.20 if it is to win the support of all shareholders," said Alex Waislitz, chairman of Thorney Opportunities Ltd, which holds Fairfax shares.

TPG's change of mind came after the Australian government revealed it is planning to deregulate media ownership, which could increase Fairfax's options as either a target for another suitor or as an acquirer.

A TPG spokesman declined to comment. In a statement, Fairfax said shareholders did not need to take any action in response to the revised proposal and promised to provide an update once it had been fully assessed. -Reutuers