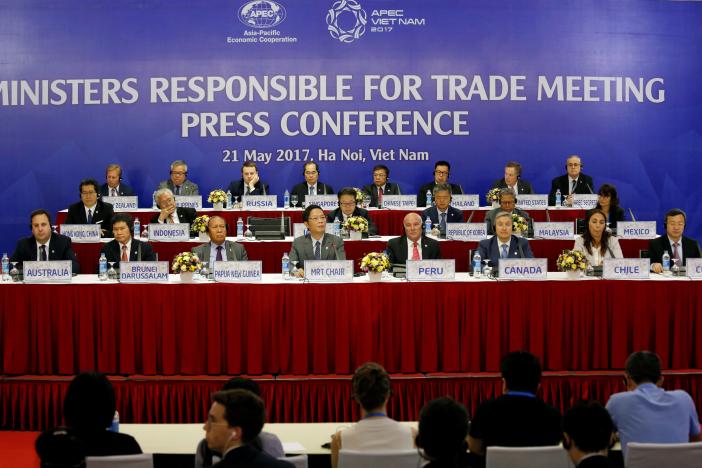 HANOI - The United States ruled out returning to the Trans-Pacific Partnership trade deal and said on Sunday it only wanted bilateral agreements in Asia, as Japan and other members agreed to more talks on pressing ahead themselves.

Turmoil over global trade negotiations was laid bare at a meeting of Asia-Pacific Cooperation (APEC) countries, which failed to agree the usual joint statement after US opposition to wording on free trade and fighting protectionism.

The meeting in Hanoi, Vietnam, was the biggest global trade gathering since US President Donald Trump upended the old order with his "America First" trade policy, designed to protect American jobs.

Trump withdrew from TPP in one of his first acts in office, but the 11 remaining countries agreed in Hanoi to explore how they could still move ahead - partly in the hope that the United States would reconsider leaving.

New US Trade Representative Robert Lighthizer said there was no way back. "TPP-11 can make their own decisions and the United States makes its decision, but we expect to stay engaged and I believe at some point there will be a series of bilateral agreements with partners in this part of the world," he told a news conference.

Although the TPP members kept the trade agreement alive, they fell short of a wholehearted commitment to move ahead immediately with a deal that members also see as a way to contain an increasingly dominant China.

"Eleven countries have shown a lot of unity and a desire to move through some of the equations that will be required to look to put the agreement into force," New Zealand Trade Minister Todd McClay, leading the discussions, told Reuters.

One of the biggest challenges is keeping on board Vietnam and Malaysia, which signed up for the deal and promised to make major reforms largely to get better US market access. They now want to renegotiate some points.

The volume of trade between the remaining countries is barely a quarter of the level it would have been if the United States had remained in the TPP.

Officials from TPP countries will meet again in Japan in July and bring proposals in November, McClay said.

Fears of protectionism have grown under the Trump presidency and the gathering in Hanoi did nothing to quell them.

The Asia-Pacific countries failed to agree on their usual joint statement after the United States opposed wording that supported free trade and opposed protectionism, officials at the meetings said.

Instead, there was a statement from the Vietnamese chairman of the talks which gave a "commitment to promote trade and investment liberalization" and which mentioned both free trade and fighting protectionism.

A separate statement from all members on actions to follow up after the summit did not contain such commitments.

The wrangling is similar to what has been seen at gatherings of Group of 20 and Group of Seven financial leaders, where statements were toned down to fit with the new US agenda.

Explaining US opposition to using the word protectionism, Lighthizer said the term was being confused with the steps that were really need to lead to free trade.

On the sidelines of the APEC meeting, Lighthizer held a series of one-on-one meetings with key partners, reflecting the push for bilateral deals.

China, putting itself forward as a global free trade champion in light of the U.S. shift, is pushing a free trade agreement to encompass the vast majority of Asian economies. The Asia trade deal it favours is called the Regional Comprehensive Economic Partnership.

That trade deal covers only Asian countries, not the United States. It is not as exhaustive as the TPP deal and doesn't have its strong protections for intellectual property or for labour rights and the environment. -Reuters