Traffic plan issued for Islamabad on arrival of Saudi prince

Traffic plan issued for Islamabad on arrival of Saudi prince

ISLAMABAD (92 News) – The Islamabad Traffic Police (ITP) has issued a special traffic diversion plan for Islamabad on the arrival of Saudi Crown Prince Mohammad bin Salman in Pakistan. The high-level Saudi delegation will arrive in Islamabad on two-day official visit starting from Feb 17 (Sunday). The Saudi delegation led by the Crown Prince and including members of the Saudi Royal family, key ministers and leading businessmen will reach Islamabad tomorrow. According to the traffic diversion plan, heavy traffic coming from Lahore to Islamabad will not be allowed to enter the capital from Rawat ‘T’ Cross. However, it could use Soan Garden, Katchehry Chowk and Peshawar Road from Saddar Rawalpindi as an alternative route to enter the Federal Capital. Likewise, the entry of heavy traffic from Kak Pul towards Koral Chowk Islamabad Expressway would remain shut down on February 17-18. The motorists will use the route consisting of Kak Pul, PWD, Soan Garden, Katchehry Road and Peshawar Road to enter Islamabad. Similarly, heavy traffic on its way from Peshawar GT and Motorway towards Islamabad would not be allowed to use Islamabad Kashmir Highway from Chungi no 26. Rather, traffic will be diverted from Chungi no.26 towards Rawalpindi-Peshawar GT Road and Motorway. The entrance of heavy traffic towards Faizabad from Katarian Pull and 9th Avenue IJP Road would be blocked. The traffic would be diverted towards Peshawar Road from IJP Road. Similarly, heavy traffic from Murree and Azad Kashmir would be blocked at Satra Meel Toll Plaza, and diverted towards Murree Motorway. Meanwhile, the Islamabad administration has decided to shut down the Metro Bus Service from Faizabad to Red Zone on February 17-18. The administration has also decided to close Margalla Hills Trail-2, Trail-3, Trail-5 and Said Pur Village Trail for the public from February 15 to February 18. The order will be effective from 3pm today (Feb 15). 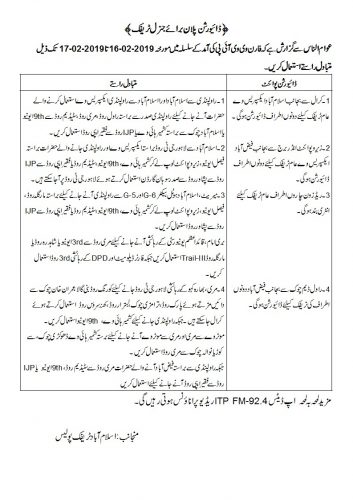 Section-144 imposed in Rawalpindi on visit of Saudi prince

The Punjab government imposed section-144 under the Criminal Procedure Code ahead of the visit of Saudi Crown Prince Mohammad Bin Salman to Pakistan. The Section-144 has been imposed in the city for seven days from Feb 15 to 21. Saudi Crown Prince is due to land in Pakistan tomorrow (Feb 16). Further, a ban on pillion riding will be imposed in the federal capital for two-days during the crown prince’s visit. The ban on pillion riding will be imposed from February 17 and 18 in Islamabad. A notification for the imposition of Section 144 has been issued by the Punjab government. Under the Section 144, public gatherings of five or more people are prohibited, while processions and rallies in any public place within the limits of the area where the law has been imposed are also not allowed. Display and carrying of weapons is also banned under the section.

All set to accord royal welcome to Saudi Prince tomorrow

All arrangements have been finalized to accord a royal welcome to Saudi prince who arrives in Islamabad on Saturday on a two-day official visit on the invitation of Prime Minister Imran Khan. Arrangements for the royal guest were reviewed in a meeting of Prime Minister Imran Khan. The meeting also approved agreements to be signed with Saudi Arabia. Pakistani fighter jets will salute him on his entry to the Pakistani territory. The security of the Saudi Crown Prince has been assigned to Triple-1 Brigade. The Crown Prince will be accompanied by a high-powered delegation including members of the Saudi Royal family, key ministers and leading businessmen. This will be the first state-level visit of the dignitary to Pakistan since his elevation to the position of the Crown Prince in April 2017.During his visit, Crown Prince Muhammad bin Salman will call on the President Dr Arif Alvi. He will also meet Prime Minister Imran Khan and Chief of Army Staff General Qamar Javed Bajwa. A Senate delegation will also call on the Crown Prince to discuss ways to enhance parliamentary cooperation between the two countries. The Saudi ministers accompanying the Crown Prince will meet their counterparts to discuss bilateral cooperation in their respective fields.During his stay, Pakistan and Saudi Arabia will be signing a number of agreements and MoUs in diverse sectors. The two countries will also discuss ways and means to develop a robust follow-up mechanism to ensure effective implementation and quick progress on tangible areas of cooperation.