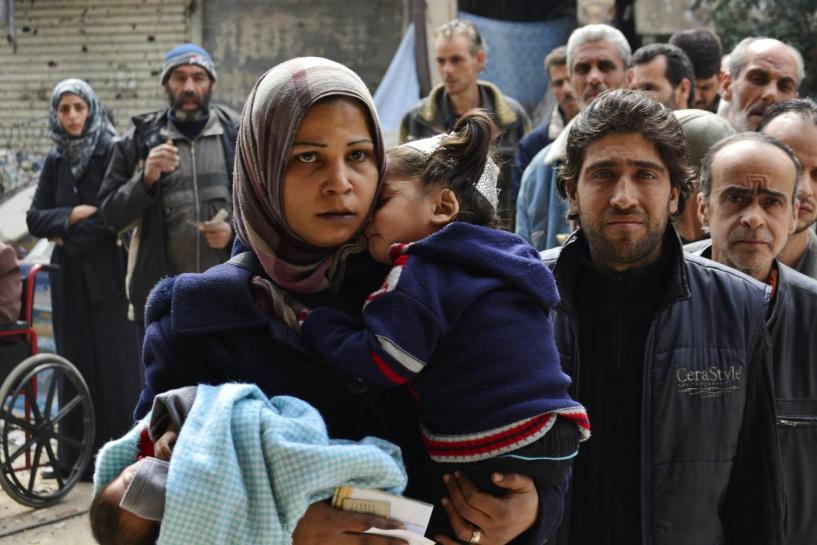 "They're coming out really weak, thirsty, and frightened," he said, after visiting several camps for the displaced in northeast Syria.

Under the banner of the Syrian Democratic Forces, an alliance of Kurdish and Arab militias is fighting to seize Islamic State's base in Syria.

With air strikes and special forces from the U.S.-led coalition, the SDF pushed into Raqqa in June after advancing on the city for months.

Fighting since late last year has displaced more than 240,000 people in the wider Raqqa province, most of them only in the last few weeks, Malik said.

"They're traumatized (by) what they've seen," he said.

"Dead bodies all over the place. In some more destroyed neighbourhoods, bodies still in that heat rotting on the street and in debris."

Recent advances along the Euphrates river, which borders the city from the south, have allowed the Kurdish-led SDF to completely encircle Islamic State inside Raqqa.

"Some places do not even have enough drinking water anymore," Malik said, after residents lost access to the river.

An estimated 30,000-50,000 people remain trapped in the city with Islamic State holding people there against their will, Malik said. Witnesses say the militants have shot at those trying to escape.

"Those who are coming out now are paying enormous amounts of money, basically their lifelong savings, to smugglers to get them out," he said. "They've left family members behind."

Many do not have enough money or could not bring elderly parents and sick relatives with them.

"There is a conflict going on to eradicate ISIS but in the process we should try to protect (civilians)," Malik said, stressing the importance of getting them safe passage out.

Even after the "military endgame" in Raqqa, he added, people will have to grapple with a humanitarian crisis and severe trauma. Many children now fear the sound of aircraft.

"This will take much longer ... to bring them back to some kind of normalcy," Malik said.

The U.S.-led coalition says it goes to great lengths to avoid civilian casualties.

Ahead of the attack on the city, the U.N. human rights office raised concerns about increasing reports of civilian deaths. In a May report, it said there had been "massive civilian casualties ... and serious infrastructure destruction."

The U.N. refugee agency is expanding its work in northeast Syria as people begin to flee the province of Deir al-Zor. A camp south of the Kurdish-controlled city of Hasakah has already taken in 2,000 displaced people, Malik said.

"Already, hundreds of them are coming out in trucks and buses," Malik said.

Islamic State militants still control swathes of Syria's eastern desert bordering Iraq and most of Deir al-Zor, which would be its last major foothold in Syria after losing Raqqa. –Reuters