Trilateral meeting of Pak, China and Afghan to be held next month: FM 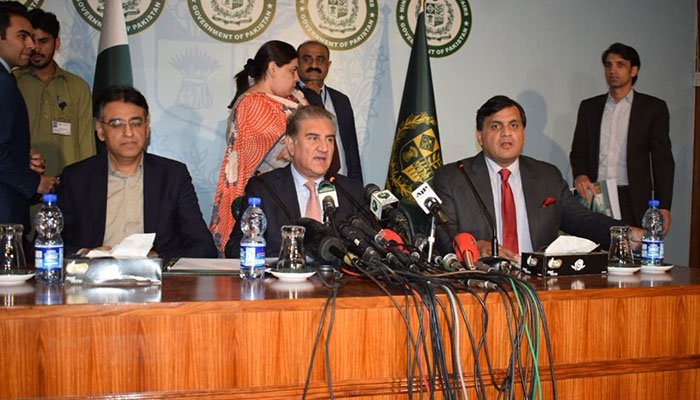 Trilateral meeting of Pak, China and Afghan to be held next month: FM

ISLAMABAD (92 News) – Minister for Foreign Affairs Shah Mehmood Qureshi said on Tuesday that a trilateral meeting among Pakistan, China and Afghanistan will be held in December to discuss the Afghan issue. Speaking to the journalists after National Security Meeting (NSC), the foreign minister said that the depth of Pak-China relations should not be seen only in the context of financial package.  He said China has always helped Pakistan in difficult times and most recently it extended help in the month of July. When asked about the visit of US Deputy Assistant Secretary of State Alice Wells, FM Qureshi said that the two sides have discussed matters pertaining to promotion of trade and energy cooperation. He said all the indicators from the US side are opening up. The minister said the US side has also offered to play a positive role on Pak-Afghan water issues. He also said Prime Minister Imran Khan's visit to China has helped convert bilateral strategic relations into economic partnership. Shah Mehmood Qureshi said the Pakistani delegation effectively highlighted economic dimension of the relationship during the visit. He said there were four main objectives of the visit, and progress has been made in all of them through fifteen agreements, memoranda of understanding and discussions with the Chinese leadership. The foreign minister said the two sides agreed to upgrade strategic dialogue to foreign minister level. It was also agreed that prisoners of the two countries will serve their remaining sentences in their respective countries. He said MoUs have been signed to learn from China's experience in poverty alleviation and also for transfer of technology to Pakistan to increase productivity in agriculture. Shah Mehmood Qureshi said discussions were held to increase exports to China so that the country's economy could be stabilized. He said negotiations on second phase of Free Trade Agreement will hopefully be completed in April next year, and the agreement will be signed on the occasion of Belt and Road Forum. The minister said the two sides also discussed ways to improve foreign exchange reserves of Pakistan. He said the technical level talks between the two sides in this regard will be held on Friday in Beijing, and the Foreign Secretary will represent Pakistan in it. He said it was also discussed that local currencies should be given priority in trade to reduce pressure on dollar. Shah Mehmood Qureshi said the priorities in the next phase of CPEC were also discussed to achieve progress, prosperity and connectivity. He also said industrialization, establishment and activation of special economic zones, transfer of technology for increase in agriculture productivity, job creation, housing, tourism, livelihood, and skill development of workforce will be focused on the next phase. Shah Mehmood Qureshi said ways were also discussed to accelerate pace of development of Gwadar Port. He said the prime minister held meetings with the Chinese president, prime minister, the National People's Congress chairman and the vice president. The prime minister, during the meeting, discussed the entire gamut of bilateral relations and regional and international issues, including possibility of talks with India, situation in Afghanistan, and counter terrorism cooperation. He said a trilateral meeting among Pakistan, China and Afghanistan will be held in December to discuss the Afghan issue.