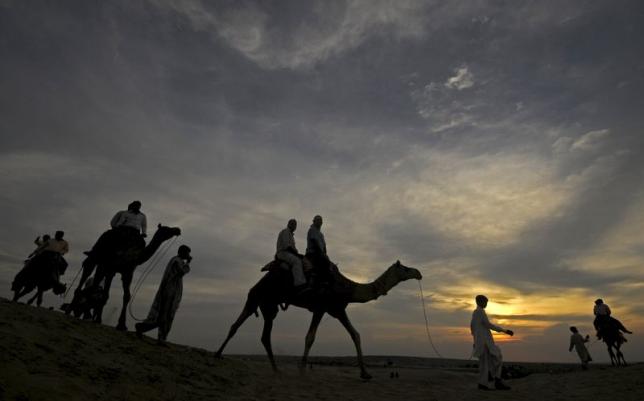 JAISALMER - India's city of gold derives its nickname from an imposing honey-colored fort overlooking sandstone dwellings hemmed in by the rolling dunes of the Thar desert. "Everything is golden," said our driver as he took us around Jaisalmer in an auto rickshaw, a three-wheeled tuk-tuk, pointing to the sandstone structures that had changed color in the sun. Men in vivid turbans smoke pipes on verandas above lanes that snake between havelis, or private mansions. Women in traditional, rainbow-hued dresses sell silver trinkets. Jaisalmer is named after the Rajput king who founded the city in the 12th century. Tourist sites include Gadsisar, a scenic lake surrounded by temples, and Patwon ki haveli, a 19th-century complex with intricately carved facades and mirrors. The 'Golden Fort' towers above the city. Its lanes, still inhabited, are filled with illuminated shops, bakeries, temples and apartments. The diversity of human activity assaults one's senses: swarthy men with bushy moustaches sing folksongs; a little girl walks the tightrope; cows lumber in the streets. A shop near the fort's entrance sells flavored bhang, a beverage in the Indian subcontinent made from cannabis. The owner, an amiable man who goes by the name Doctor Bhang, serves it with cold coffee and milkshakes. A photo of celebrity chef Anthony Bourdain visiting the shop adorns the wall. Many cafes and hostels have sprung up to cater for the growing numbers of backpackers. Dylan Cafe, in the heart of the city, is a popular hangout with spartan yet clean rooms. The rooftop cafe has an eclectic menu of local Rajasthani cuisine and international dishes. Tourists also regularly venture out the area's sand dunes. The nearest ones, known as Sam, are about 50 km (30 miles) from Jaisalmer. Motorbikes are available for hire, and visitors are often spotted on tarred roads, zooming past herdsmen guiding goats along the way. Tourists can also clamber on to camels and set off on a desert safari. The landscape is bare -- no buildings, no roads, no vegetation -- nothing to distract from the stark beauty of the desert. A detour on the way back to Jaisalmer takes visitors to Kuldhara, a maze of ruins that are the remnant of an ancient village abandoned in the 19th century. Kuldhara and its crumbling walls are said to be haunted by a curse and have an eerie beauty. Visitors are not allowed to stay through the night. - Reuters