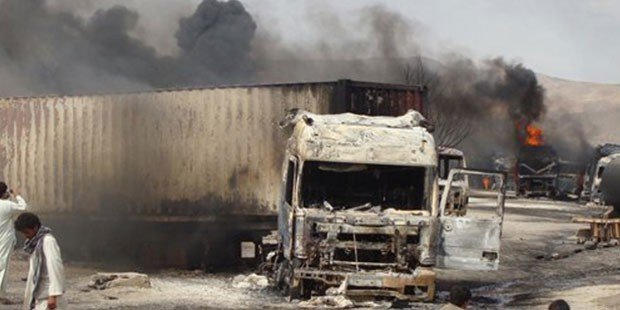 KABUL - A truck bomb targeting an Afghan special forces base in an eastern province killed at least six people and wounded dozens, officials said on Thursday. The blast was the latest in a wave of attacks launched by Taliban insurgents and their allies since most foreign troops withdrew from Afghanistan at the end of last year. "The bomb was huge and it was carried by a mini-truck," said Aleem Fedaee, the governor of Logar province, where the blast took place. "It inflicted a lot of damage to the civilians and broke windows even a kilometre away." Three soldiers and three civilians were among the dead, he added. Thirteen wounded civilians were taken to a hospital about 200 metres (660 ft) from the site of the blast, a doctor at the hospital said. He added that the explosion also wounded 11 doctors in the hospital, in the provincial capital of Pul-i-Alam, about 100 km (62 miles) from Kabul. Afghan troops have been battling a rising insurgency that has killed and wounded thousands of soldiers, police and civilians since the beginning of the year. There have been almost 5,000 civilian casualties in Afghanistan in the first half of the year, UN figures show. -Reuters