Truckers slow traffic at Calais in protest at migrant impact 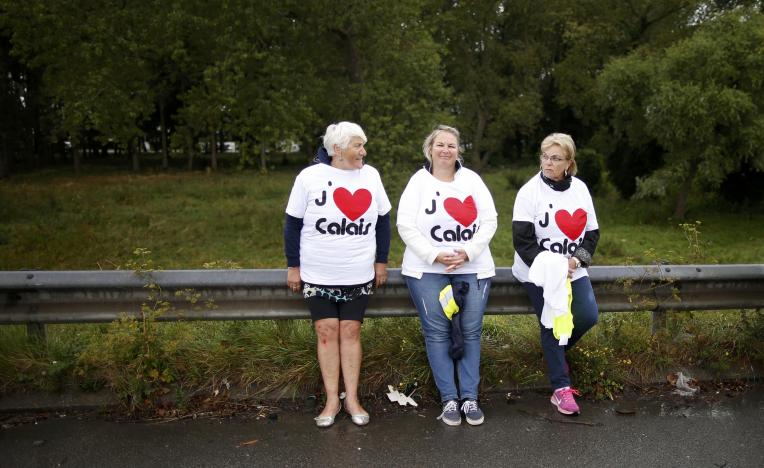 Truckers slow traffic at Calais in protest at migrant impact

LILLE - Two convoys of trucks and tractors slowed traffic to a crawl on the main approach road to Calais on Monday in a protest against the impact of growing numbers of migrants disrupting the French port. Answering an appeal from drivers and farmers unions, the vehicles set off from different assembly points towards Calais at around 8 AM (0600 GMT). Calais residents would also form a human chain along the port road, said protest organisers. Thousands of people fleeing war and poverty are waiting in Calais for a chance to reach Britain, regularly trying to force their way onto vehicles heading there by ferry and rail tunnel. The attempts have continued in the face of extra security staff and the construction of high fences along road and rail routes. "We have to do this. We have to escalate things, because for months now the situation has been getting worse and worse," said David Sagnard, president of FNTR national truck drivers' federation, as the convoys, each with about 40 vehicles, set off. "Before, it was just attempts to get on trucks. Now there is looting and wilful destruction, tarpaulins are slashed, goods stolen or destroyed ... Drivers go to work with fear in their bellies and the economic consequences are severe," he said. Calais is one of the flashpoints of Europe's migrant crisis, resurgent in recent weeks as more people arrive on the continent's southern shores. The site has also become the focus of political debate in both France and Britain. Fears of growing numbers of migrants, partly fuelled by scenes from Calais, were a key issue influencing Britain's recent vote to quit the European Union. Some French opposition politicians have also called for the ditching of an agreement under which border controls take place on the French side of the sea, saying Britain should handle the problem. In February and March this year, French authorities dismantled the southern half of Calais' so-called "jungle" migrant camp and dispersed some of its inhabitants. Last week, Interior Minister Bernard Cazeneuve said French authorities would dismantle the rest. About 7,000 migrants are living in the remaining northern half of the camp, up from 4,500 in June, according to local authorities. Humanitarian groups put the number closer to 9,000. Authorities have also put up shelters and welcome centres for the migrants, and have pledged to build more and increase the number of police officers to help manage the crisis. -Reuters