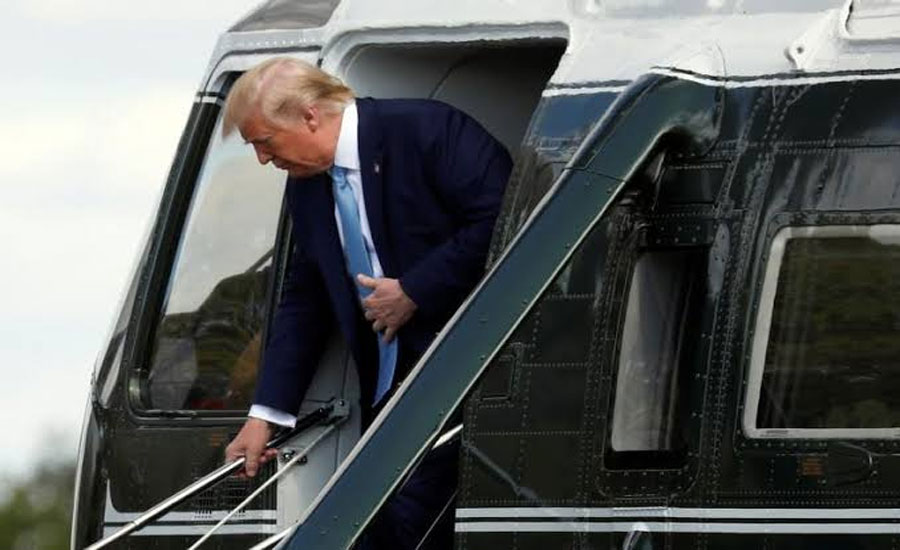 (Reuters) - A hacking group that appears to be linked to the Iranian government attempted to break into US President Donald Trump’s re-election campaign but were unsuccessful, sources familiar with the operation told Reuters on Friday. Microsoft Corp said earlier on Friday in a blog post bit.ly/2ngs5bZ that it saw "significant" cyber activity by the group which also targeted current and former US government officials, journalists covering global politics and prominent Iranians living outside Iran. Trump’s official campaign website is the only one of the remaining major contenders’ sites that is linked to Microsoft’s cloud email service, according to an inspection of publicly available mail exchanger records. “We have no indication that any of our campaign infrastructure was targeted,” said Trump campaign Director of Communications Tim Murtaugh. In a 30-day period between August and September, the group, dubbed “Phosphorous” by Microsoft, made more than 2,700 attempts to identify consumer email accounts belonging to specific customers and then attacked 241 of those accounts. “Four accounts were compromised as a result of these attempts; these four accounts were not associated with the U.S. presidential campaign or current and former U.S. government officials,” the blog post said. Nineteen Democrats are seeking their party’s nomination to run for president in the November 2020 election. Three Republicans have announced their candidacy to challenge Trump in the party’s nominating contest. Microsoft’s blog post did not identify the election campaign whose network was targeted by Phosphorous hackers, but sources told Reuters the target was Trump’s re-election effort. The FBI did declined to comment. Chris Krebs, director of the Homeland Security Department’s election security division, known as CISA, said he was aware of the Microsoft report. In a statement, Krebs called it “yet more evidence that our adversaries are looking to undermine our democratic institutions.” Hacking to interfere in elections has become a concern for governments, especially since U.S intelligence agencies concluded that Russia ran a hacking and propaganda operation to disrupt the American democratic process in 2016 to help then-candidate Trump become president. Moscow has denied any meddling. Tensions between the United States and Iran have risen since May 2018, when Trump withdrew from a 2015 international nuclear accord with Tehran that put limits on its nuclear program in exchange for easing of sanctions. Trump has since reinstated U.S. sanctions, increasing pressure on the Iranian economy, including its oil trade. The Iranian government did not issue any immediate comment through state-run media on Microsoft’s statement. John Hultquist, director of intelligence at cybersecurity firm FireEye Inc, said the particular Iranian group named in the attempts had been conducting “high-volume operations” aimed at harvesting credentials for online accounts. Phosphorus is also known by APT 35, Charming Kitten, and Ajax Security Team. Redmond, Washington-based Microsoft said Phosphorous used information gathered from researching their targets or other means to game password reset or account recovery features and attempt to take over some targeted accounts. The attacks were not technically sophisticated, Microsoft said. “This effort suggests Phosphorous is highly motivated and willing to invest significant time and resources engaging in research and other means of information gathering,” the blog said. Federal Election Commission records show that the Trump campaign has spent tens of thousands of dollars on Microsoft products and software. Microsoft has been tracking Phosphorus since 2013 and said in March that it had received a court order to take control of 99 websites the group used to execute attacks bit.ly/2TDKee1. A computer network used by 2016 Democratic presidential candidate Hillary Clinton's campaign here was hacked in a cyberattack on Democratic Party political organizations. Big tech companies are under pressure to ramp up security for next year’s U.S. elections and others around the world. Companies including Facebook Inc (FB.O), Alphabet Inc’s Google (GOOGL.O), Microsoft and Twitter Inc (TWTR.N) met with U.S. intelligence agencies earlier in September to discuss security strategies.