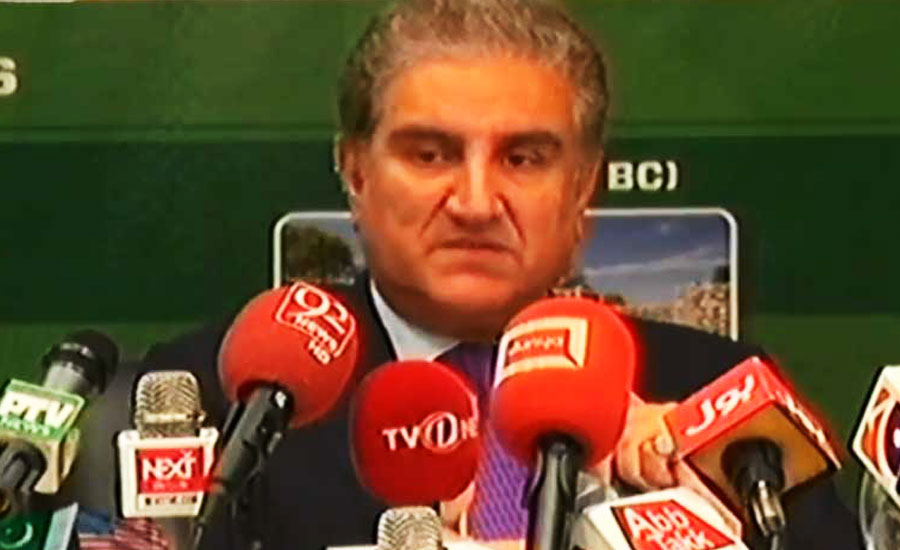 WASHINGTON (92 News) – Foreign Minister Shah Mahmood Qureshi confirmed that Prime Minister Imran Khan has invited US President Donald Trump to visit Pakistan and he accepted the invitation. Addressing a news conference in Washington on Tuesday, the meeting between Imran Khan and Donald Trump has demonstrated joint resolve to promote peace and reconciliation process in Afghanistan. He also said the meeting also conveyed commitment to promote peace in South Asia and US President Trump has expressed his facilitation role in resolving the Kashmir issue. “We want trade with America not aid. The US president appreciated the economic policies of Pakistan. Now the civil and military are on the same page, which enhanced the confidence of international investors,” he said. The minister termed India has mourned due to the current meeting of the US president and Imran Khan. He maintained that the Kashmir issue must be resolved, adding, “We want peace and two atomic power nations cannot take risk of destruction, it will be same as committing suicide,” he elaborated. “There is no debate on Indian spy Kulbhushan Jadhav because its verdict has been announced before everyone,” the foreign minister said. He also said that delegation level talks also held between the two countries and Donald Trump said, “We are going to have a very good relationship with Pakistan.” He said talks between the two countries comprises three meetings and the third meeting was extended in which Minister for Maritime Affairs Ali Zaidi, Special Advisor to Prime Minister Hafeez Sheikh, Advisor for Commerce Abdul Razak Dawood, Zulfi Bukhari, Chief of Army Staff and Director General ISI were also present. https://www.youtube.com/watch?v=Fl-gwQfCgUA Foreign Minister said United States has also endorsed Pakistan's desire for peace in Afghanistan. Earlier, Prime Minister Imran Khan has said that Shakil Afridi – a Pakistani physician who helped the CIA run a fake hepatitis vaccine program in Abbottabad – can be released in replacement of Dr Aafia Siddiqui, a Pakistani neuroscientist jailed in the US for almost a decade. In an interview with American TV channel ‘Fox News’ in Washington, the prime minister mentioned that Indian should come on the negotiation table. “Nuclear war not option, India must abandon nuclear weapons,” he added. The prime minister said if India complies with this demand Pakistan will also not use nuclear weapons. He said Pakistan has a comprehensive and effective nuclear command and control system. He also reaffirmed that atomic programme of Pakistan in the safe hands.