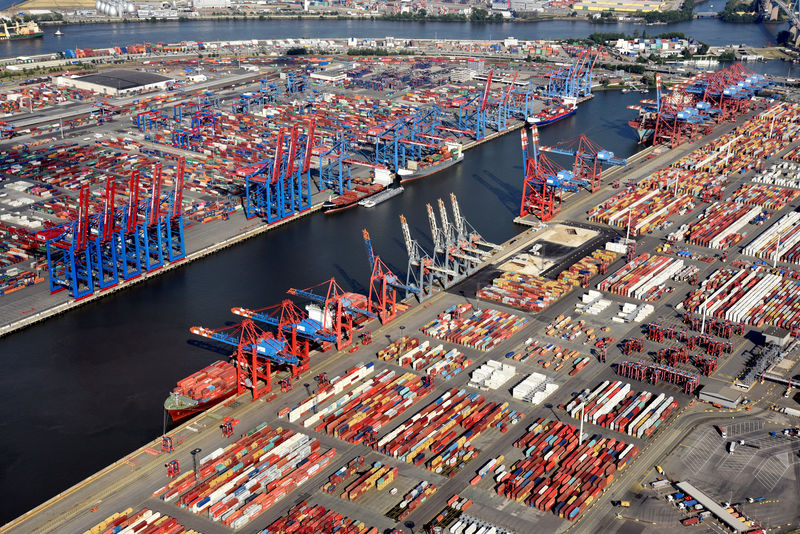 BEIJING (Reuters) - US President Donald Trump sought to ratchet up pressure on China for trade concessions by proposing a higher 25 percent tariff on $200 billion worth of Chinese imports, his administration said . US Trade Representative Robert Lighthizer said Trump directed the increase from a previously proposed 10 percent duty because China has refused to meet US demands and has imposed retaliatory tariffs on US goods. “The increase in the possible rate of the additional duty is intended to provide the administration with additional options to encourage China to change its harmful policies and behavior and adopt policies that will lead to fairer markets and prosperity for all of our citizens,” Lighthizer said in a statement. There have been no formal talks between Washington and Beijing for weeks over Trump’s demands that China make fundamental changes to its policies on intellectual property protection, technology transfers and subsidies for high technology industries. Two trump administration officials told reporters on a conference call that Trump remains open to communications with Beijing and that through informal conversations the two countries are discussing whether a “fruitful negotiation” is possible.”We don’t have anything to announce today about a specific event, or a specific round of discussions, but communication remains open and we are trying to figure out whether the conditions present themselves for a specific engagement between the two sides,” one of the officials said. Derek Scissors, a China scholar at the American Enterprise Institute in Washington, said a 25 percent tariff rate is more likely to shut out Chinese products and shift American supply chains to other countries, as a 10 percent duty could be offset by government subsidies and weakness in China’s yuan currency. “If we’re going to use tariffs, this gives us more flexibility and it’s a more meaningful threat,” he said, adding that Trump’s pressure strategy will not work if he does not resolve trade disputes with US allies such as the European Union, Mexico and Canada. But the move drew swift condemnation from US business lobby groups worried that tit-for-tat tariffs would start to hamper economic growth. “Escalating tariffs against China is the wrong approach to address legitimate concerns US businesses have with China’s harmful practices,” said Myron Brilliant, head of international affairs for the US Chamber of Commerce. “Each tariff escalation leads to further retaliatory action from China – ultimately inflicting even more harm on American businesses, workers, farmers, ranchers, and consumers.”

The higher tariff rate, if implemented, would apply to a list of goods valued at $200 billion identified by the USTR last month as a response to China’s retaliatory tariffs on an initial round of US tariffs on $34 billion worth of Chinese electronic components, machinery, autos and industrial goods. Trump has ultimately threatened tariffs on over $500 billion in Chinese goods, covering virtually all US imports from China. The USTR said it will extend a public comment period for the $200 billion list to Sept. 5 from Aug. 30 due to the possible tariff rate rise. The list, unveiled on July 10, hits American consumers harder than previous rounds, with targeted goods ranging from Chinese tilapia fish and dog food to furniture, lighting products, printed circuit boards and building materials. China said on Wednesday that “blackmail” would not work and that it would hit back if the United States takes further steps hindering trade, including applying the higher tariff rate. “US pressure and blackmail won’t have an effect. If the United States takes further escalatory steps, China will inevitably take countermeasures and we will resolutely protect our legitimate rights,” Chinese Foreign Ministry spokesman Geng Shuang told a regular news briefing. Investors fear an escalating trade war between Washington and Beijing could hit global economic growth, and prominent US business groups, while weary of what they see as China’s mercantilist trade practices, have condemned Trump’s aggressive tariffs.

Trump also got more pushback on his tariff plans from the US Congress on Wednesday as a bipartisan group of senators, led by Republican Rob Portman of Ohio, launched new legislation that would scale back the president’s power to impose tariffs for national security reasons under a Cold War-era trade law. The proposal would require a more robust justification from the Department of Defense for “Section 232” tariffs such as those imposed on steel and aluminum imports and those now under consideration for autos. It would also give Congress more oversight of the process. The move signals displeasure among Trump’s own party over his protectionist actions, but chances of it becoming law are slim as Congress would likely need to override a presidential veto by Trump.