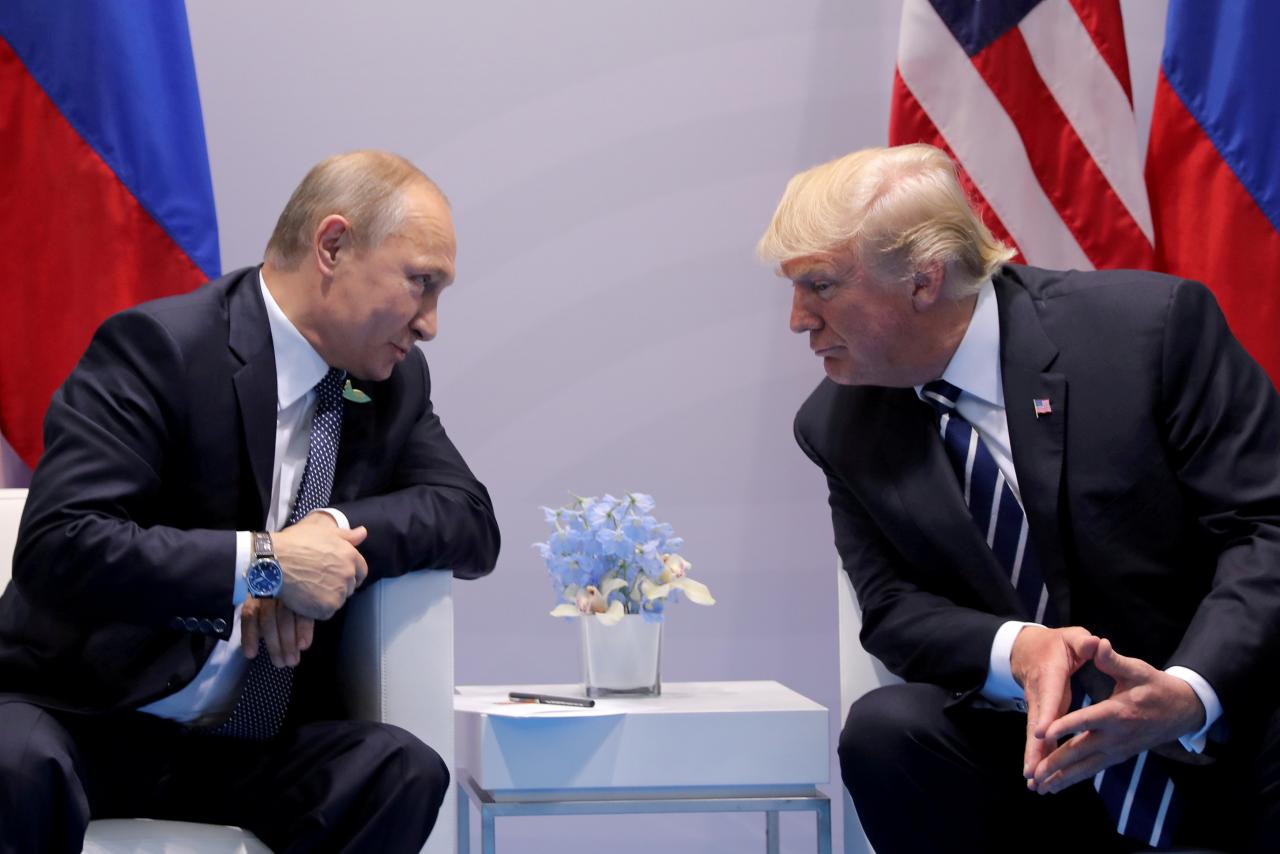 HELSINKI (Reuters) - After months of exchanging long-distance compliments, Donald Trump and Vladimir Putin sit down on Monday for their first ever summit, a potential political minefield at home for the US president but a geopolitical win for his Russian counterpart. Neither side expects major breakthroughs from the talks in the Finnish capital beyond warm words, an agreement to begin repairing battered US-Russia relations, and maybe a deal to start talks on issues such as nuclear arms control and Syria. The two men, who have praised each other’s leadership qualities from afar, could also agree to start restocking their respective embassies and returning confiscated diplomatic property after a wave of expulsions and retaliatory action prompted by the poisoning of a former Russian spy in Britain. Ahead of the summit, both sides talked down the event, however, with Trump telling CBS he was going in with “low expectations” and John Bolton, Trump’s national security adviser, saying on ABC’s “This Week” that the United States was not looking for “deliverables” and that the meeting would be “unstructured.” Russian Foreign Minister Sergei Lavrov told Russia’s RT TV station that he also had low expectations. He would regard the summit as a success if there was an agreement to merely reopen severed lines of communications across the board, he said. For Putin, the fact that the summit is even happening despite Russia’s semi-pariah status among some Americans and US allies is a geopolitical win because, in Russian eyes, it shows that Washington recognises Moscow as a great power whose interests must be taken into account. For Russia, it is also a powerful sign that Western efforts to isolate Moscow have failed. But for Trump, whose White House victory was actively supported by 12 Russian military intelligence agents, according to a recent US indictment, and whose entourage is still being investigated for possible collusion with Moscow, the meeting is freighted with domestic political risk. “We can say confidently that Putin’s political risks are lower than those of President Trump,” said Andrey Kortunov, head of RIAC, a Moscow think-tank close to the Russian Foreign Ministry. “Putin has less to lose and more to gain because he does not have a domestic opposition, a potentially hostile legislature, and is not begin investigated like Trump. But if you look at the US media they mostly focus on potential risks. Nobody there really believes that any good can come out of this summit.” The Helsinki summit is the capstone to a nearly week-long trip for Trump during which he has sown doubts about his commitment to the NATO military alliance, Washington’s so-called special relationship with Britain, and US relations with the European Union that he called “a foe” in trade terms. Against that backdrop and swirling uncertainty about what Trump might do or say next, his summit with Putin, which will include a one-on-one session with the Russian leader with only interpreters present, has both US allies and US politicians worried lest he make hasty and sweeping concessions.

Some politicians in the West believe the summit is happening at one of the most crucial junctures for the West since the 1991 fall of the Soviet Union. Certain NATO allies fear Putin might seek a grand deal that would undermine the US-led transatlantic alliance. Trump has said that he will raise the alleged Russian election meddling with Putin but does not expect to get anywhere, has spoken vaguely about the possibility of halting NATO war games in the Baltic region, and has said repeatedly that it would be good if he could get along with Russia. When asked last month if he would recognise Russia’s 2014 annexation of Ukraine’s Crimea, he replied: “We’re going to have to see.” On the summit’s eve, Senate Democratic leader Chuck Schumer, a political opponent of Trump, said he had told Secretary of State Mike Pompeo the Helsinki meeting was a mistake. “First, I don’t believe the meeting should take place but if it is going to happen, President Trump must press Putin hard on the issue of election interference. He can’t simply raise it, accept Putin’s denial and then let him off the hook,” Schumer said in a statement. “Second, the President must demand that the 12 Russians named in the indictment be sent to the US to stand trial. And third, President Trump should not agree to weaken, lift, or curtail any of the sanctions on Russia.” Any Trump request for Russia to extradite hacking suspects is likely to fall on deaf ears, however, as the Kremlin, citing the Russian constitution, has a policy of not handing over suspects wanted by other countries. Many Western politicians remain angry over Russia’s annexation of Crimea, its backing of pro-Russian separatists in Ukraine, and its support for Syria’s Bashar al-Assad. Other accusations, denied by Moscow, include that it meddled in European politics, supplied the weapon that shot down a passenger plane in 2014 over Ukraine, and was behind the poisoning of the former Russian spy in Britain. Moscow would love to have US sanctions - initially imposed over the Crimea annexation - eased and eventually lifted. But most in Russia do not expect the summit to produce such an outcome.