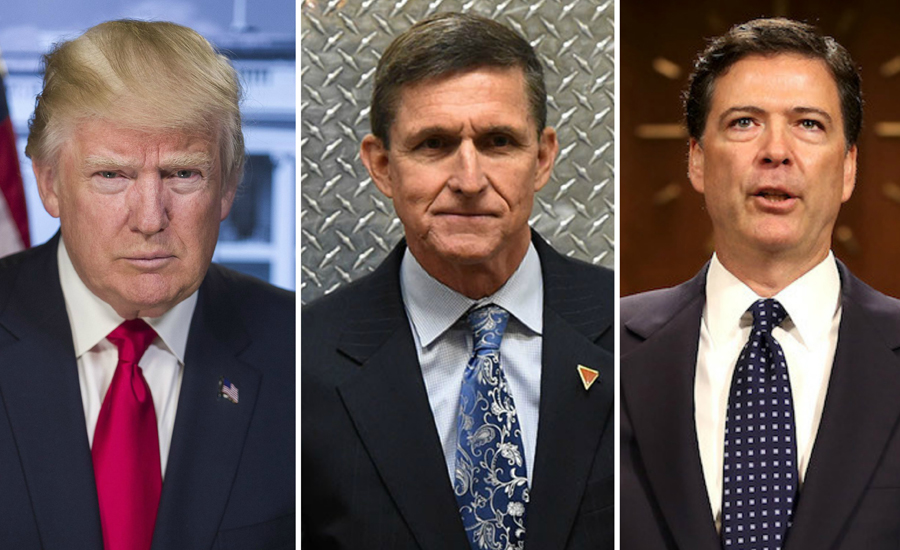 WASHINGTON - US President Donald Trump asked then-FBI Director James Comey to end the agency's investigation into ties between former White House national security adviser Michael Flynn and Russia, according to a source who has seen a memo written by Comey.

The explosive new development followed a week of tumult at the White House after Trump fired Comey and then discussed sensitive national security information about Islamic State with Russian Foreign Minister Sergei Lavrov.

The Comey memo, first reported by the New York Times, caused alarm on Capitol Hill and raised questions about whether Trump tried to interfere with a federal investigation.

The White House quickly denied the report, saying in a statement it was "not a truthful or accurate portrayal of the conversation between the president and Mr. Comey."

Comey wrote the memo after he met in the Oval Office with Trump, the day after the Republican president fired Flynn on Feb. 14 for misleading Vice President Mike Pence about the extent of his conversations last year with Russia's ambassador, Sergei Kislyak.

“I hope you can let this go,” Trump told Comey, according to a source familiar with the contents of the memo.

The New York Times said that during the Oval Office meeting, Trump condemned a series of government leaks to the news media and said the FBI director should consider prosecuting reporters for publishing classified information.

Coming the day after charges that Trump disclosed sensitive information to the Russians last week, the new disclosure further rattled members of Congress.

"The memo is powerful evidence of obstruction of justice and certainly merits immediate and prompt investigation by an independent special prosecutor," said Democratic US Senator Richard Blumenthal.

Republican and Democratic lawmakers said they wanted to see the memo.

Republican US Representative Jason Chaffetz, chairman of a House of Representatives oversight committee, said his committee "is going to get the Comey memo, if it exists. I need to see it sooner rather than later. I have my subpoena pen ready."

In a letter to acting FBI Director Andrew McCabe, Chaffetz set a deadline of May 24 for the FBI to produce "all memoranda, notes, summaries, and recordings referring or relating to any communications between Comey and the President."

"We need to have all the facts, and it is appropriate for the House Oversight Committee to request this memo," said Ryan spokeswoman AshLee Strong.

Legal experts took a dim view of Trump's comments, as quoted in the memo.

"For the president to tell the FBI to end a potential criminal investigation, that's obstruction of justice," said Erwin Chereminsky, a constitutional law professor and dean of University of California, Irvine School of Law. "This is what caused President Nixon to resign from office."

But the experts said intent was a critical element of an obstruction of justice charge, and the president’s words could be subject to interpretation and possibly put into the context of other actions, like Comey’s termination.

The fact that the president apparently said he “hoped” Comey would end the Flynn investigation rather than more directly ordering it “makes for a weaker but still viable case,” said Christopher Slobogin, a criminal law professor at Vanderbilt University Law School.

Flynn's resignation came hours after it was reported that the Justice Department had warned the White House weeks earlier that Flynn could be vulnerable to blackmail for contacts with Kislyak before Trump took office on Jan. 20.

Kislyak was with Lavrov at the White House when Trump disclosed the sensitive information.

A spokeswoman for the FBI declined to comment on the details of the memo.

An emailed fundraising appeal by Trump's political organisation and the Republican National Committee sent out after reports of the Comey memo said Trump was being victimized by an "unelected bureaucracy."

"You already knew the media was out to get us," it said. "But sadly it’s not just the fake news… There are people within our own unelected bureaucracy that want to sabotage President Trump and our entire 'America First' movement."

The new development came as Republican and Democratic lawmakers pressured Trump to give a fuller explanation for why he revealed sensitive intelligence information to Lavrov.

The information had been supplied by a US ally in the fight against the Islamic State militant group, the officials said. -Reuters