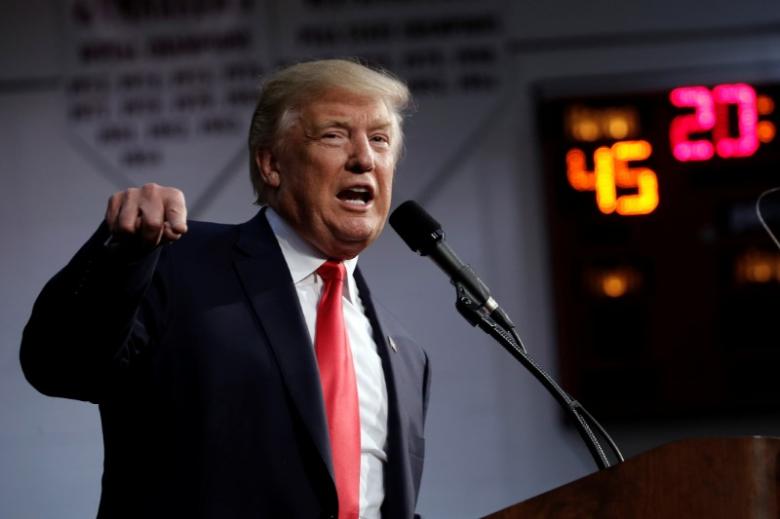 WASHINGTON – Donald Trump stepped up his attacks against US House Speaker Paul Ryan on Tuesday, one day after the top Republican in Congress said he was not going to defend the party's presidential nominee or campaign for him. Facing a barrage of criticism over sexually aggressive comments that surfaced on Friday, Trump has seen his support among some lawmakers fall away in recent days as the Republican Party splits apart over its White House candidate less than a month before the election. In social media posts early Tuesday, Trump lashed out against Ryan and other Republicans for failing to back him amid the controversy and as most national opinion polls show Democratic candidate Hillary Clinton increasing her lead. "Despite winning the second debate in a landslide (every poll), it is hard to do well when Paul Ryan and others give zero support!" Trump, who has never held political office, said in a post on Twitter. He referred to Sunday's bitter presidential debate, where he was seen as giving a performance that was more disciplined than the first of the candidates' three debates ahead of the Nov. 8 election. On Facebook, the New York businessman blamed media outlets for "trying to rig this election" and backing Clinton. His campaign, marked for months by controversies over both his policies and his brash style, ran into deep crisis after the emergence on Friday of a video from 2005 showing the former reality TV star bragging crudely about groping women and making unwanted sexual advances. Ryan told congressional Republicans on Monday that he would put his full energy into preserving Republican majorities in Congress so as not to give Clinton a "blank check," all but conceding that the former secretary of state would likely win the White House. He did not withdraw his endorsement. Ryan's move angered Trump and his supporters on Capitol Hill. "Our very weak and ineffective leader, Paul Ryan, had a bad conference call where his members went wild at his disloyalty," Trump said in a tweet on Tuesday. PRIEBUS, PENCE SUPPORT Unlike Ryan, Republican National Committee Chairman Reince Priebus made clear to RNC members on Monday that the committee, the party's leadership and fundraising arm, still backed Trump, two RNC members told Reuters. Trump's vice presidential running mate, Indiana Governor Mike Pence, was silent over the weekend, but resurfaced in television interviews on Monday to reinforce his support. New Jersey Governor Chris Christie, a former rival for the White House who has became a close ally of Trump, also reaffirmed his backing even as he called Trump's comments in the 2005 video "completely indefensible." "In the end, this election is about bigger issues than that," Christie told CBS Radio's WFAN on Tuesday, adding that he did not blame other Republicans who have withdrawn their support. "I'm not going to sit here and be critical of people who don't want to support him." Representative Steve King of Iowa, however, did not hesitate to criticize those backing away from Trump. "That's a mistake ... that drags the entire ticket down," he said in an interview with CNN. "What does it do to your integrity if you help Hillary Clinton become president?" Both Trump and Clinton head to the key battleground state of Florida with campaign events later on Tuesday. –Reuters