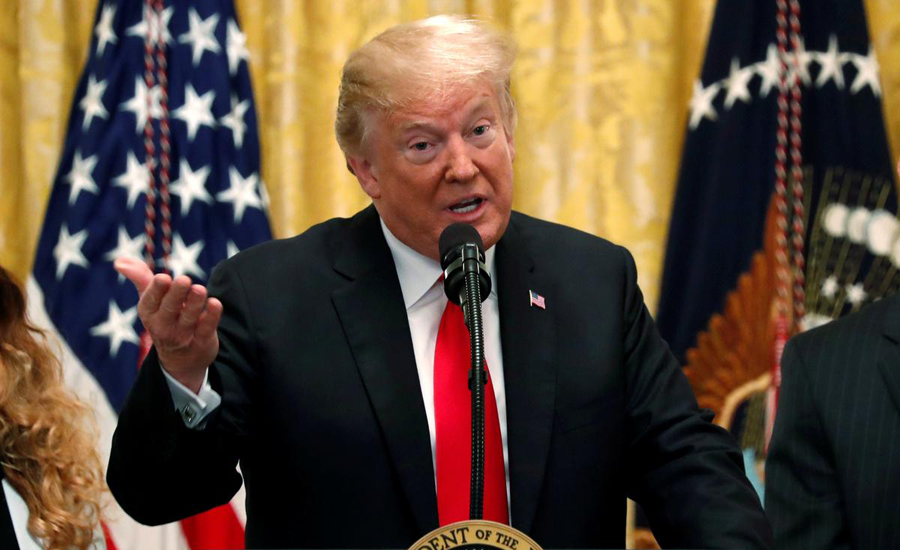 DUBAI/WASHINGTON (Reuters) - US President Donald Trump blamed Iran on Friday for attacks on two oil tankers at the entrance to the Gulf despite Tehran’s denials, stoking fears of a confrontation in the vital oil shipping route. Iran has dismissed earlier US charges that it was behind Thursday’s attacks that crippled two tankers. It has previously suggested it could block the Strait of Hormuz, the main route out for Middle Eastern oil, if its own exports were halted. Thursday’s blasts followed similar attacks a month earlier on four tankers, which Washington also blamed on Tehran. They come at a time of escalating confrontation between the United States and Iran. Last month Washington sharply tightened sanctions against Tehran, which in response has threatened to step up its nuclear activity. Asked how he planned to address Tehran and prevent any further incidents, Trump told Fox News: “We’re going to see.” He also said that any move to close the Strait of Hormuz would not last long. Nevertheless, Trump, who last year pulled the United States out of an agreement between world powers and Tehran to curb Iran’s nuclear programme in return for the lifting of sanctions, said that he was open to negotiations with Iran. “We want to get them back to the table,” Trump said. “I’m ready when they are.” He added that he was in “no rush”. Iran has repeatedly said it will not re-enter talks with the United States unless it reverses Trump’s decision to withdraw from the nuclear deal. The US military released a video on Thursday it said showed Iran’s Revolutionary Guards were behind the blasts that struck the Norwegian-owned Front Altair and the Japanese-owned Kokuka Courageous in the Gulf of Oman, at the mouth of the Gulf. Iran said the video proved nothing and that it was being made into a scapegoat. “These accusations are alarming,” Foreign Ministry spokesman Abbas Mousavi said. Iran has accused the United States and its regional allies such as Saudi Arabia and the United Arab Emirates of “warmongering” by making accusations against it. Tehran and Washington have both said they have no interest in starting a war. But this has done little to assuage concerns that the two arch foes could stumble into a conflict. Oil prices surged on Thursday, reflecting the jitters, although they have since given up some of those gains. U.N. Secretary-General Antonio Guterres told the U.N. Security Council on Thursday the world could not afford “a major confrontation in the Gulf region”. China, the European Union and others have called for restraint from all sides. In a notable signal that close U.S. allies are wary of Washington’s position, Germany said the U.S. video was not enough to apportion blame for Thursday’s attack. The U.S. military said black-and-white footage it filmed from a U.S. aircraft showed Iran’s Guards on one of their patrol boats drawing up to the Kokuka Courageous and removing an unexploded limpet mine from its hull. Britain said it took the matter “extremely seriously” and, if Iran was involved, “it is a deeply unwise escalation”.