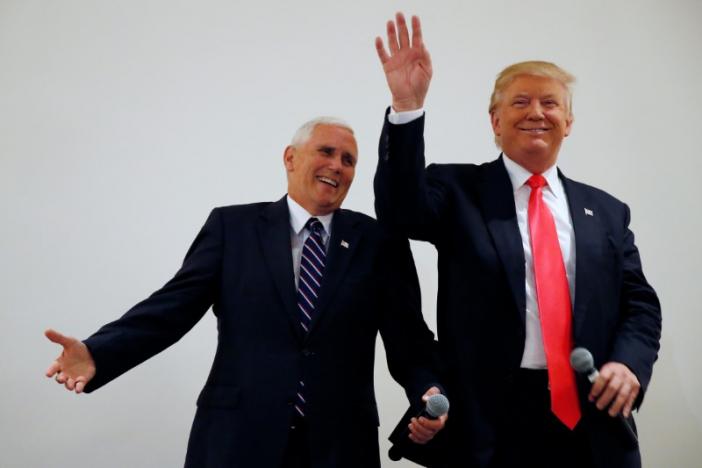 WASHINGTON – Republican vice presidential candidate Mike Pence vigorously defended running mate Donald Trump against allegations of sexual misconduct and promised that evidence casting doubt on the claims would come out on Friday.
Trump's White House campaign has been scrambling to recover from the release a week ago of a 2005 video in which he bragged about groping women and making unwanted sexual advances. While Trump said the video was just talk and he had never behaved in this way, multiple women subsequently went public with allegations of sexual misconduct against the New York real estate magnate going back three decades. Trump furiously denied the allegations on Thursday, saying that The New York Times, which published two women's claims, and other media, along with his Democratic rival Hillary Clinton, were engaged in a vicious campaign to stop him from winning the Nov. 8 election. "Stay tuned. I know there's more information that's going to be coming out that will back his claim that this is all categorically false," Pence told CBS show "This Morning." The Wall Street Journal reported on Friday that Trump would accuse Mexican billionaire Carlos Slim - the top shareholder in the New York Times Company - of helping to generate reports of the sexual misconduct. Trump will claim that Slim, as a donor to the Clinton Foundation charity who also holds a 17.35 percent stake in the New York Times, has an interest in helping her White House campaign, the newspaper cited the adviser as saying. His allegations would feed into Trump's claims of a rigged election system and "false smears" that he says are part of a conspiracy bent on defeating him. LONG BLAMED MEXICO If Trump goes on the offensive against Slim it will only be the latest chapter in a running series of skirmishes with Mexico and Mexicans. Trump kicked off his campaign last year accusing Mexico of sending rapists and drug dealers to the United States and promised to build a wall along the southern U.S. border that he said he would make Mexico pay for. He also promised to tear up or revise the North American Free Trade Agreement. The Mexican peso slid to record lows in September when Trump was close to Clinton in opinion polls, but the currency has since climbed back. Shortly after Trump's comments insulting Mexicans last year, a television company controlled by Slim canceled a project with Trump. "His statement was totally out of line ... working with someone so closed-minded was not going to work," Elias, Slim's spokesman and son-in-law, said at the time. Trump has previously linked Slim to the New York Times' coverage of his campaign. "I know why I get bad treatment in the New York Times. Because it’s owned by Mexico," Trump said at a February rally in Nevada. "I don’t know if you know, a rich guy in Mexico actually has power at the New York Times. I wonder why they don’t like us, you know, I just wonder," he said. Slim spokesman Arturo Elias told the Journal that the allegations Mexico's richest man was interfering in the U.S. election were "totally false." Reuters could not immediately reach Slim's spokesman for comment. The Trump campaign did not immediately respond to Reuters' requests for comment on the Journal report. New York Times publisher Arthur Sulzberger Jr. said in a statement, "Carlos Slim is an excellent shareholder who fully respects boundaries regarding the independence of our journalism. He has never sought to influence what we report." TURNING POINT In several morning television interviews on Friday, Pence tried in vain to change the subject from Trump's treatment of women to Clinton, her family's charity and information from the hacked emails of her campaign manager, John Podesta. The Times reported on Wednesday that two women said they had endured unwanted groping or kisses from the former TV personality. Several other women made allegations of sexual aggression by Trump in various media outlets following that report. Reuters could not independently verify the incidents. The Times said on Thursday it stood by its story and rejected charges the article was libelous after a lawyer for Trump threatened legal action and demanded a retraction. The allegations of sexual misconduct have been a turning point for some in the party who were already uneasy about Trump's unorthodox campaign, and a string of Republican officials have distanced themselves from him since the lewd video emerged. The most senior of them, Republican House of Representatives Speaker Paul Ryan, angered Trump when he announced this week he would no longer campaign for Trump or defend him but would focus on trying to preserve the Republican majorities in Congress in next month's election. Ryan was set to give a speech on Friday in Wisconsin to focus on what he called Clinton's “liberal progressivism,” which he asserted was “arrogant, condescending, and paternalistic." Trump has slipped further back from Clinton in national opinion polls in the past week. A Reuters/Ipsos survey this week showed one in five Republicans thought Trump's comments about groping women disqualified him from the presidency. The poll showed him 8 percentage points behind Clinton among likely voters. –Reuters