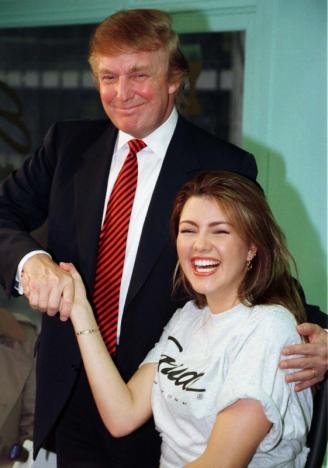 WASHINGTON – Republican presidential candidate Donald Trump deepened his attacks on a former beauty queen Alicia Machado on Friday, calling her "disgusting" and alleging the existence of a sex tape as he refused to back away from an issue that threatens to damage his already weak standing among women and Hispanics.
Trump was quickly and sharply rebuked by his Democratic rival, Hillary Clinton, and by Machado, a Venezuelan-born former Miss Universe who was criticized by Trump for gaining weight after she won the crown in 1996. Clinton called the Republican candidate "unhinged." Clinton had raised Trump's treatment of Machado during the two candidates' first debate on Monday night as an example of how he views women. Clinton said Trump, the former owner of the Miss Universe pageants, had called Machado "Miss Piggy" and also "Miss Housekeeping" because she was a Latina. Trump did not apologise then and in a television interview the following day he strongly criticized Machado over her post-pageant weight gain. With less than six weeks to go until the Nov. 8 election, Trump has refused to let the issue fade and he went on a pre-dawn tirade on Twitter on Friday. "Did Crooked Hillary help disgusting (check out sex tape and past) Alicia M become a U.S. citizen so she could use her in the debate?" Trump said. Offering no proof of his claims, he said the Clinton campaign was unaware of the beauty queen's past and was "duped" by her. His attack came as he struggled to rebound from what was widely viewed as a loss to Clinton in Monday's debate. Machado denounced the accusations as "cheap lies" from a man intent on defaming her, posting her response in Spanish on Instagram next to a photo of herself draped in the U.S. flag. "By way of his hate campaign, the Republican candidate insists on discrediting and demoralizing a woman, which is clearly one of his most frightening characteristics," she wrote. Clinton rebuked Trump in her own Twitter posts, saying "This is...unhinged, even for Trump." "What kind of man stays up all night to smear a woman with lies and conspiracy theories?" Clinton wrote, praising Machado for standing up to Trump. Machado, who is now a U.S. citizen, has appeared on major television and cable networks and has given numerous interviews this week in which she said she was humiliated by Trump. Politico reported that Machado has starred in racy reality TV programs and posed naked for Playboy's Mexican version, but said media outlets have found no evidence that she has starred in pornographic films. WOMEN, HISPANIC VOTERS In rising to the bait dangled by Clinton on Monday over the Machado issue and not moving on, Trump is in some ways echoing his days of public dispute in August with the parents of a Muslim Army captain killed in Iraq. That incident caused anguish among many Republican leaders concerned that he had nothing to gain by attacking a grieving family. His remarks on Friday could hurt Trump further with women and Hispanic voters, both groups that favour Clinton in opinion polls. Clinton, 68, a former U.S. senator and secretary of state, is the first woman to win the presidential nomination of a major U.S. political party. An average of opinion polls aggregated by RealClearPolitics showed Clinton ahead of Trump by 2.9 percentage points on Friday, or 47.3 points to 44.4, slightly lower than the previous margin of 3 points on Wednesday, but well up from 0.9 point on Sept. 19. The latest Reuters/Ipsos national tracking poll, released on Wednesday, showed Clinton leading by 42 percent to Trump's 38 percent among likely voters. In his comments about Machado on Tuesday morning, Trump told Fox News: "She was the winner and she gained a massive amount of weight. And it was a real problem. We had a real problem. Not only that - her attitude - and we had a real problem with her." Clinton campaign chairman John Podesta referred to Trump's Friday attacks with a scathing tweet that implied the 70-year-old Trump should stick to going to the bathroom if he gets up in the night. "I'm almost @realDonaldTrump's age, so get the urge to get up in the middle of the night, but impt safety tip: don't reach for your phone." Trump also attacked the "dishonest" media in his Twitter posts on Friday, saying that any story citing unidentified sources is "just made up lies!" He encouraged readers to cancel subscriptions to some of the newspapers that have not endorsed him in the White House race, including USA Today, the Dallas Morning News and the Arizona Republic. The Chicago Tribune joined that list on Friday, endorsing Libertarian candidate Gary Johnson over Trump or Clinton. –Reuters