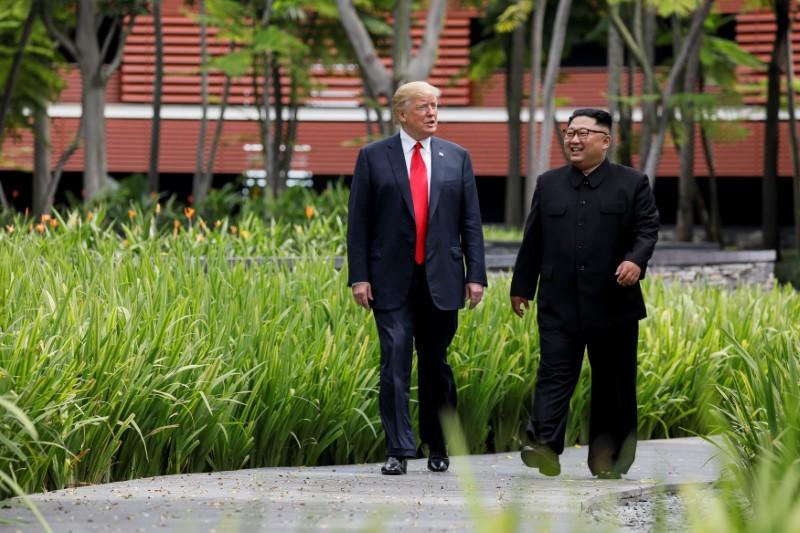 WASHINGTON (Reuters) - Kim Jong Un told President Donald Trump he believed their efforts could open up a “new future” between North Korea and the United States and expressed hope for “practical actions” in the future, according to a letter from the North Korean leader . But Kim, in the note posted by Trump on Twitter, made no mention of any work by North Korea towards denuclearization at a time when there has been no sign of concrete action by Pyongyang since the two leaders held a landmark summit in Singapore on June 12. Despite that, Trump hailed the July 6 letter as a “very nice note,” saying “Great progress being made.” Hours after Trump’s tweet, State Department spokeswoman Heather Nauert said North Korea offered to meet a US delegation on Sunday to discuss the repatriation of remains of US soldiers killed in the 1950-53 Korean War, a pledge Trump had said he secured from Kim during last month’s summit. This came after the North Koreans failed to show up for a meeting on the issue at the inter-Korean border village of Panmunjom, South Korea’s Yonhap news agency reported. Kim, in his note, praised Trump for “energetic and extraordinary efforts made by Your Excellency Mr. President for the improvement of relations between the two countries and the faithful implementation of the joint statement.” He was referring the summit statement signed by the two leaders - the first-ever US-North Korean summit - in which Kim agreed in broad terms to “work toward denuclearization” of the Korean Peninsula. Trump later said North Korea was no longer a nuclear threat, even though no details were announced, and critics suggested the president had failed to secure any new commitments from Pyongyang towards the dismantling of its nuclear missile programme. The date of the letter suggests it may have been sent around the time of Secretary of State Michael Pompeo’s visit to Pyongyang last week, in which the United States and North Korea struggled to make headway on the denuclearization issue. North Korea accused the United States on Saturday of making “gangster-like” demands in the talks in North Korea, contradicting Pompeo who said the old enemies had made progress. Adam Mount, an analyst at the Federation of American Scientists who focuses on US nuclear strategy and North Korea, said in a tweet that Kim “blows off Pompeo in Pyongyang, has his team stand up US negotiators in the DMZ, but still delights Trump with a vague note.” “He’s realized he can humiliate and ignore the US as long as he flatters the president,” Mount said. Kim’s note, which Trump included in his Twitter post with an image of the letter in Korean and an English-language translation of it, struck a positive tone. “I firmly believe that the strong will, sincere efforts and unique approach of myself and Your Excellency Mr. President aimed at opening up a new future between the DPRK and the US will surely come to fruition,” Kim wrote, referring to North Korea by its acronym.
Kim said he hoped the process between the two sides would lead to “practical actions” in the future, though he offered no specifics, and that there would be a second meeting between the two leaders.