WASHINGTON/BEIJING (Reuters) - US President Donald Trump on Friday lashed back at a new round of Chinese tariffs by heaping an additional 5% duty on some $550 billion in targeted Chinese goods in the latest tit-for-tat trade war escalation by the world’s two largest economies. Trump’s move, announced on Twitter, came hours after China unveiled retaliatory tariffs on $75 billion worth of US goods, prompting the president earlier in the day to demand US companies move their operations out of China. The intensifying US-China trade war stoked market fears that the global economy will tip into recession, sending U.S. stocks into a tailspin, with the Nasdaq Composite .IXIC down 3%, and the S&P 500 .SPX down 2.6%. US Treasury yields also fell as investors sought safe-haven assets, and crude oil, targeted for the first time by Chinese tariffs, fell sharply. Trump’s tariff response was announced after markets closed on Friday, leaving potentially more damage for next week. “Sadly, past Administrations have allowed China to get so far ahead of Fair and Balanced Trade that it has become a great burden to the American Taxpayer,” Trump said on Twitter. “As President, I can no longer allow this to happen!” He said the United States would raise its existing tariffs on $250 billion worth of Chinese imports to 30% from the current 25% beginning on Oct. 1, the 70th anniversary of the founding of the communist People’s Republic of China. At the same time, Trump announced an increase in planned tariffs on the remaining $300 billion worth of Chinese goods to 15% from 10%. The United States will begin imposing those tariffs on some products starting Sept. 1, but tariffs on about half of those goods have been delayed until Dec. 15. The US Trade Representative’s office confirmed the effective dates, but said it would conduct a public comment period before imposing the 30% tariff rate on Oct. 1. US business groups reacted angrily to the new tariff hike. “It’s impossible for businesses to plan for the future in this type of environment. The administration’s approach clearly isn’t working, and the answer isn’t more taxes on American businesses and consumers. Where does this end?” said David French, a senior vice president for the National Retail Federation. Trump is due to meet leaders of the G7 major economies at a summit this weekend in France, where trade tensions will be among the hottest discussion topics.

The president’s announcement, which followed an Oval Office meeting with his advisers, fits a pattern of swift retaliation since the trade dispute with China started more than a year ago. “He decided he wanted to respond. He was given a few different options on things he could do and ultimately that was what he decided,” a senior White House official said. “He’s not taking this stuff lightly, but he’s in a fine mood and looking forward to the G7.” Another person familiar with the matter said officials had to scramble to come up with options after Trump caught them offguard with tweets promising a response in the afternoon. Since taking office in 2017, Trump has demanded that China make sweeping changes to its economic policies to end theft and forced transfers of American intellectual property, curb industrial subsidies, open its markets to American companies and increase purchases of U.S. goods. China denies Trump’s accusations of unfair trade practices and has resisted concessions to Washington. “We don’t need China and, frankly, would be far better off without them. The vast amounts of money made and stolen by China from the United States, year after year, for decades, will and must STOP,” Trump tweeted on Friday morning. “Our great American companies are hereby ordered to immediately start looking for an alternative to China, including bringing your companies HOME and making your products in the USA.” It’s unclear what legal authority Trump would be able to use to compel U.S. companies to close operations in China or stop sourcing products from the country. Experts said he could invoke the International Emergency Economic Powers Act used in the past for sanctions on Iran and North Korea, or cut offending companies out of federal procurement contracts.. The U.S. Chamber of Commerce rebuffed Trump’s call, urging “continued, constructive engagement.” “Time is of the essence. We do not want to see a further deterioration of U.S.-China relations,” Myron Brilliant, executive vice president and head of the business group’s international affairs, said in a statement. Trump also said he was ordering shippers including FedEx (FDX.N). Amazon.com Inc (AMZN.O), UPS (UPS.N) and the U.S. Postal Service to search out and refuse all deliveries of the opioid fentanyl to the United States. China’s Commerce Ministry said that on Sept. 1 and Dec. 15 it will impose additional tariffs of 5% or 10% on a total of 5,078 products originating from the United States and reinstitute tariffs of 25% on cars and 5% on auto parts suspended last December as U.S.-China trade talks accelerated. It was unclear whether a new round of talks expected in September would go ahead.

The growing economic impact of the trade dispute was a key reason behind the U.S. Federal Reserve’s move to cut interest rates last month for the first time in more than a decade. “The president’s trade war threatens to push the economy into a ditch,” said Mark Zandi, chief economist at Moody’s Analytics. “The president is hoping that the Federal Reserve will ... bail him out, but if he continues to pursue the war, the Fed won’t be up to the task.” Among U.S. goods targeted by Beijing’s latest tariffs were soybeans, which will be hit with an extra 5% tariff starting Sept. 1. China will also tag beef and pork from the United States with an extra 10% tariff. GRAPHIC: U.S. farm exports to China dry up in trade war - here 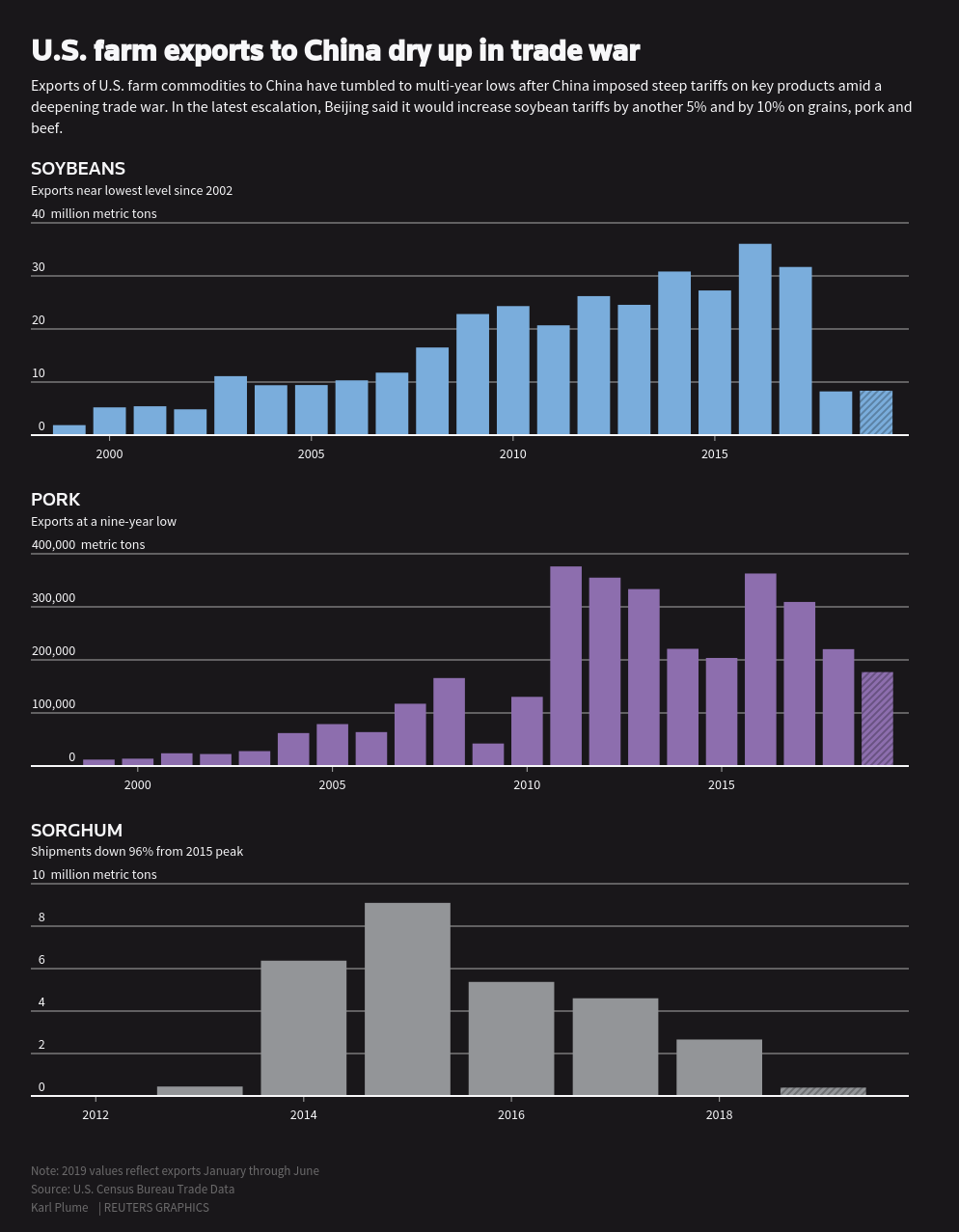 Although the Trump administration has rolled out aid to farmers stung by China’s tariffs, there is growing frustration in America’s agricultural belt, a key political constituency for Trump as he heads into his 2020 re-election campaign. “The view from much of farm country is bleak and anger is boiling over. With bankruptcies and delinquencies rising and prices falling, the frustration with the lack of progress toward a deal is growing,” the bipartisan Farmers for Free Trade group said in a statement.