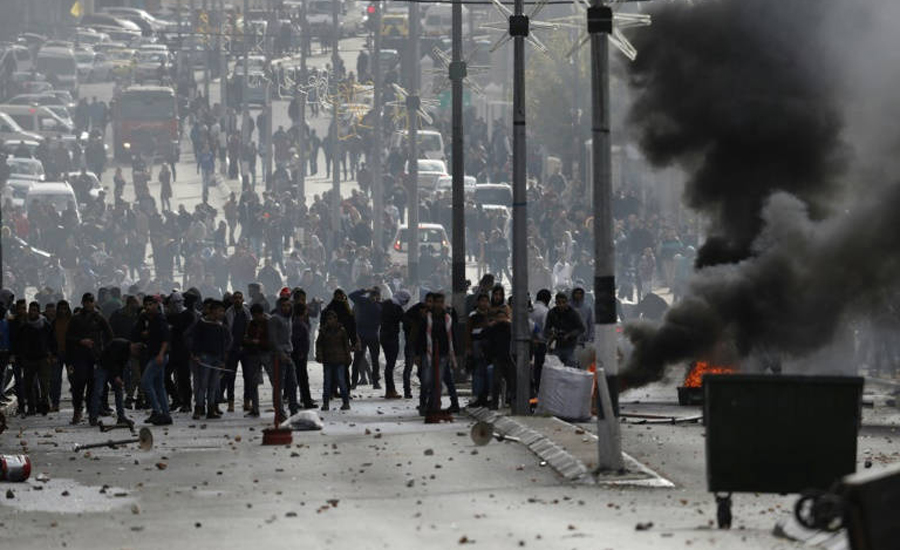 WEST BANK (AFP) - Furious Palestinians have called for a "day of rage" on Friday as protests spread against US President Donald Trump's widely criticised recognition of Jerusalem as Israel's capital.

A senior Palestinian official said late Thursday US Vice President Mike Pence was "not welcome in Palestine" following the policy shift, which ended decades of US ambiguity on the status of the disputed city.

But the White House said it would be "counterproductive" to cancel a scheduled meeting between Pence and Palestinian president Mahmud Abbas later this month.

Sporadic clashes broke out between Palestinians and Israeli forces on Thursday, as Israel deployed hundreds more troops to the occupied West Bank amid uncertainty over the fallout.

Trump's announcement was met by an almost universal diplomatic backlash as Israeli Prime Minister Benjamin Netanyahu lavished praise on the president, saying his name would be associated with Jerusalem's long history and urging other countries to follow suit.

In a speech in Gaza City, Hamas leader Ismail Haniya called for a new intifada, or uprising. Within hours several projectiles were fired from the Gaza Strip, the Israeli military said.

Demonstrations were held in West Bank cities as well as in Gaza, where five Palestinians were wounded from Israeli fire, Gazan authorities said.

Israeli forces dispersed tear gas at a checkpoint entrance to Ramallah, while the Palestinian Red Crescent reported 22 wounded from live fire or rubber bullets in the West Bank.

Trump said his defiant move -- making good on a 2016 presidential campaign pledge -- marks the start of a "new approach" to solving the Israeli-Palestinian conflict.

"It is time to officially recognise Jerusalem as the capital of Israel," he said Wednesday.

But his willingness to part with international consensus on such a sensitive issue drew increasingly urgent warnings from around the world.

Russian President Vladimir Putin said he was "deeply concerned", calling for the Palestinians and Israel to renew negotiations.

And Turkish President Recep Tayyip Erdogan said it would put the region in a "ring of fire".

Pence is due to meet the Palestinian president in the second half of December on a regional tour, but a senior member of Abbas's Fatah faction said the leader would not meet him.

"The American vice president is not welcome in Palestine. And President Abbas will not welcome him," said Jibril Rajoub.

However the White House is likely to only consider the meeting cancelled if they hear that from Abbas, whose office could not be reached for comment.

In a joint statement with Jordan's King Abdullah II, Abbas said "any measure tampering with the legal and historical status of Jerusalem is invalid" and warned Trump's decision would "have dangerous repercussions".

In Lebanon, Hassan Nasrallah, the head of the powerful Shiite movement Hezbollah, called for a mass demonstration on Monday "to protest and denounce this American aggression". Protests are also planned in Turkey and Malaysia.

Palestinian shops in east Jerusalem and the West Bank were largely shuttered and schools closed on Thursday in answer to a general strike call.

"By this decision, America became a very small country, like any small country in the world, like Micronesia," Salah Zuhikeh, 55, told AFP in Jerusalem's Old City.

Hamas called for fresh protests after the main weekly Muslim prayers on Friday.

Trump's move left many angry US allies struggling to find a diplomatic response, with an emergency meeting of the UN Security Council set for Friday.

Trump also kicked off the process of moving the US embassy from Tel Aviv to Jerusalem -- another campaign promise dear to US evangelical Christian and right-wing Jewish voters.

His predecessors had made the same pledge, but quickly reneged upon taking office.

Several peace plans have unravelled in the past decades over the issue of how to divide sovereignty or oversee holy sites in Jerusalem.

Israel seized Arab east Jerusalem in the 1967 Six-Day War and later annexed it in a move never recognised by the international community. The Palestinians want the eastern sector as the capital of their future state.

The international community does not recognise the ancient city as Israel's capital, insisting the issue can only be resolved in negotiations. This point was reiterated by UN chief Antonio Guterres, who stressed his opposition to "any unilateral measures that would jeopardise the prospect of peace".

Trump insisted the move did not prejudge final talks, saying it simply reflected the reality that west Jerusalem is and will continue to be part of Israel under any settlement. "The United States would support a two-state solution if agreed to by both sides," he said.