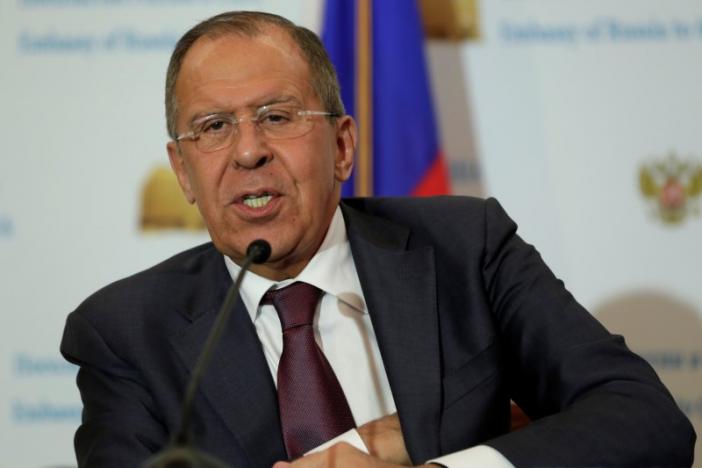 WASHINGTON - Russia's top diplomat met President Donald Trump on Wednesday and praised the US administration as problem solvers, just as the White House drew criticism over the firing of the FBI director who was leading a probe into Moscow's alleged interference in US politics.

The talks with Foreign Minister Sergei Lavrov were the highest-level public contact between Trump and the government of Russian President Vladimir Putin since the Republican took office on Jan. 20.

While not unprecedented, it is a rare privilege for a foreign minister to be received by a US president for a bilateral meeting in the White House.

In a stunning development, Trump on Tuesday fired FBI Director James Comey, whose agency is investigating alleged Russian interference in the 2016 US presidential election and the possibility Trump associates may have colluded with Moscow. Democrats accused Trump of trying to slow down the investigation by firing the FBI chief.

Trump described his talks with Lavrov as "very, very good." When asked whether the Comey dismissal had affected his meeting, Trump said, "not at all." He and Lavrov said they discussed the civil war in Syria, where Russia backs President Bashar al-Assad.

"We want to see the killing, the horrible killing, stopped in Syria as soon as possible and everyone is working toward that end," Trump told reporters.

Lavrov, who earlier met with US Secretary of State Rex Tillerson, said his discussions with members of the Trump administration had convinced him they were people who wanted to cut deals and solve problems.

"The Trump administration, and the president himself, and the secretary of state, I was persuaded of this once again today, are people of action," Lavrov said.

US intelligence agencies concluded in a January report that Putin had ordered an effort to disrupt the 2016 election that included hacking into Democratic Party emails and leaking them, with the aim of helping Trump.

"I believe that politicians are damaging the political system of the US, trying to pretend that someone is controlling America from the outside."

The Trump administration denies claims of collusion with Russia.

Earlier, as Tillerson and Lavrov posed for photographs, the Russian sarcastically deflected a reporter's question about Comey's dismissal.

The Russian embassy in Washington tweeted a picture from the Lavrov meeting of Trump shaking hands with Russian Ambassador Sergei Kislyak, a man at the center of the controversy on Russian contacts with associates of Trump.

Former US National Security Advisor Michael Flynn was forced to resign for failing to disclose the content of his talks with Kislyak and then misleading Vice President Mike Pence about the conversations.

Senior Democratic Senator Dick Durbin said the Oval Office encounter was a photo opportunity for Russia. "President Trump in these pictures, is shaking hands with Russians, and the Kremlin is gleefully tweeting these pictures around the world," Durbin said on the Senate floor.

Tensions in the relationship grew following US air strikes against a Syrian airfield in April in response to a chemical weapons attack that Washington blamed on Assad.

Both Trump and Lavrov appeared to strike a more conciliatory tone after both capitals had presented souring views of the relationship recently.

The White House said Trump "raised the possibility of broader cooperation on resolving conflicts in the Middle East and elsewhere" and still sought to build a better relationship between the two countries.

Lavrov said that despite difficulties "our countries can and should contribute jointly to the settlement of the most urgent issues in international affairs".

Trump underscored "the need for Russia to rein in the Assad regime, Iran and Iranian proxies," the White House said. Lavrov said the meeting mainly focused on ideas of de-escalation zones in Syria.