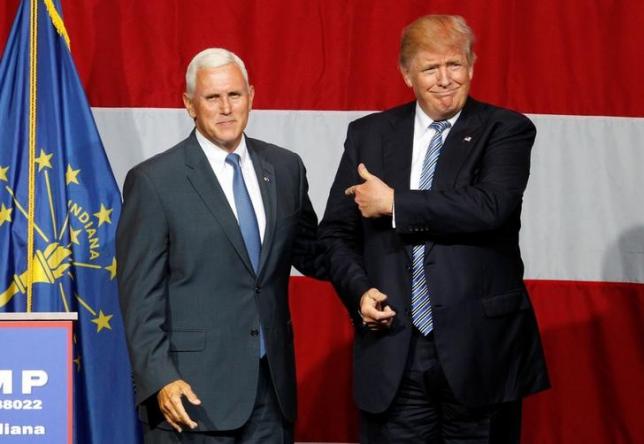 WASHINGTON - Republican Donald Trump neared the end of his vice presidential search on Thursday, with Indiana Governor Mike Pence and former US House Speaker Newt Gingrich appearing as the front-runners on the eve of Trump's announcement of his pick. The presumptive Republican presidential nominee tweeted on Wednesday night that he would announce his choice on Friday at 11 a.m. (1500 GMT) in Manhattan. Sources familiar with campaign operations cautioned that while Pence and Gingrich were finalists, Trump could always have a last-minute change of heart and choose someone else from his short list. New Jersey Governor Chris Christie, 53, a former rival to Trump in the presidential race, is also high on the list of potential running mates and provides the kind of counterpunch to Democratic rival Hillary Clinton that Republicans like. Trump is preparing for next week's Republican National Convention in Cleveland, where he will be formally nominated as the party's presidential candidate for the Nov. 8 election. Pence, 57, a former congressman, is seen as a safe choice, not too flashy but popular among conservatives with Midwestern appeal. Gingrich, 73, is a close adviser to Trump with a wealth of ideas and deep experience in the legislative process from his time as speaker of the House of Representatives in the 1990s. A source close to the campaign said Trump appeared to be leaning towards Pence but could easily change his mind. In what has been an unusually public process, Trump, 70, sat down on Wednesday with both Pence and Gingrich separately in Indianapolis. He also met with a fourth potential No. 2, US Senator Jeff Sessions, 69, of Alabama, who has been one of Trump's closest advisers The New York businessman had dinner with Pence on Tuesday night after they appeared together at a rally. Trump, joined by daughter Ivanka and sons Donald Jr. and Eric Trump, had breakfast with Pence and his wife, Karen, on Wednesday at the governor's residence in Indianapolis. Trump adviser Ed Brookover told CNN that Trump "first and foremost" wants a running mate that he has good chemistry with and someone who can help him govern best. -Reuters