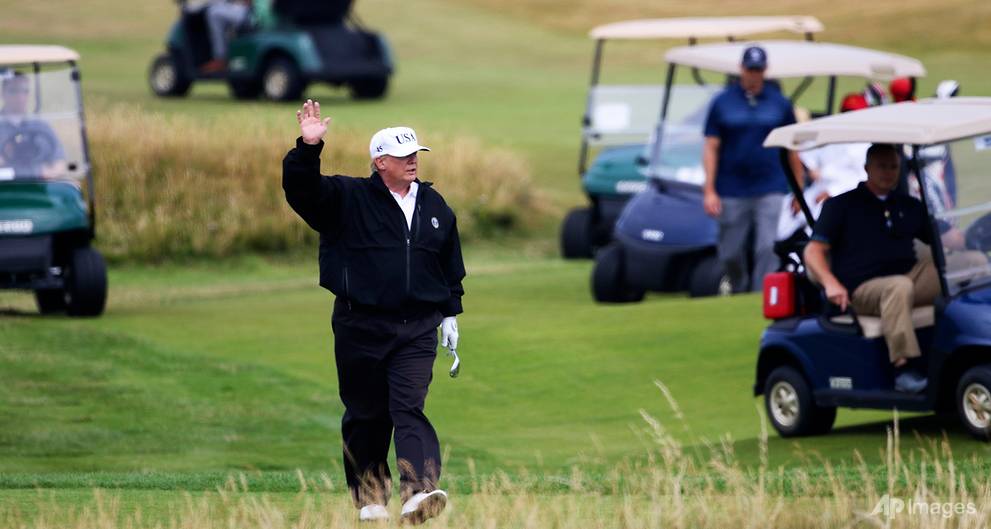 TURNBERRY, Scotland (Reuters) - US President Donald Trump played golf at his course on Scotland’s west coast ahead of a summit with Kremlin chief Vladimir Putin that could be overshadowed by accusations of Russian meddling in the 2016 US election. In an uproarious trip to Europe, Trump harangued members of the NATO military alliance, scolded Germany for its dependence on Russian energy and shocked Britain by publicly criticising Prime Minister Theresa May’s Brexit strategy. Trump apologised to May for the furore over his withering public critique, blaming “fake news” and promising instead a bilateral trade agreement with Britain after it leaves the European Union in March. While Trump took tea with Queen Elizabeth, a US federal grand jury charged 12 Russian intelligence officers with stealing data from the campaign of Democratic presidential candidate Hillary Clinton. Trump has repeatedly said the investigation into suspected Russian interference in the 2016 US election - which he casts as a “rigged witch hunt” - makes it hard for him to do substantive deals with Moscow. Wearing a baseball cap emblazoned with “USA” for a round of golf, Trump at one point waved at dozens of protesters who were chanting “No Trump!” just a few hundred yards away from a beach beside his Trump Turnberry course. He appeared to say something to them. They booed. Describing golf as “my primary form of exercise”, Trump tweeted: “The weather is beautiful, and this place is incredible! Tomorrow I go to Helsinki for a Monday meeting with Vladimir Putin.”

Putin held several meetings in the Kremlin, including talks with Palestinian leader Mahmoud Abbas. The Russian leader was due to attend the opera at the Bolshoi Theatre later and will watch the final of the soccer World Cup in Moscow on Sunday. Trump and Putin, who control the world’s two biggest nuclear arsenals, are due to meet in the Finnish capital, a venue that evokes memories of Cold War showdowns between the Soviet Union and the United States. Trump, a 72-year-old former New York real estate developer who praises his own deal-making skills, and Putin, a 65-year-old former KGB spy who cultivates a macho image as a man of action, are due to have some time alone at the summit. In the most detailed US accusation to date that Moscow meddled in the presidential election, a federal grand jury said Russian military intelligence agency officers covertly monitored computers of Clinton’s campaign and Democratic campaign committees, and stole large amounts of data. The charges shine an even brighter spotlight on Trump’s treatment of Putin, who has repeatedly denied that Russia sought to skew the election that Trump, a Republican, unexpectedly won. US Secretary of State Mike Pompeo, speaking to reporters before his departure to Helsinki on Sunday, pushed back at Democrats who called for the summit to be cancelled. “I am confident that President Trump’s meeting with Vladimir Putin will put America in a better place. I think it’s very important that they meet,” he told reporters en route from Mexico , in remarks embargoed .

Trump questioned why Barack Obama had not acted on claims of Russian meddling if the FBI had informed the then president ahead of the 2016 election. He also asked where the Democratic National Committee server now was. “Why didn’t the FBI take possession of it? Deep State?” Trump asked on Twitter. When asked at a news conference on Friday whether he would tell Putin to stay out of US elections, Trump said “Yes”. The president also indicated he did not expect much progress on the issue. “I will absolutely bring that up,” Trump told reporters. “I don’t think you’ll have any ‘Gee, I did it. I did it. You got me.’” After tens of thousands of people marched peacefully against Trump in central London on Friday, a few thousand protested in the Scottish capital, Edinburgh, were a blimp depicting Trump as an orange, snarling baby was raised. A Greenpeace activist swooped on a powered parachute within a few hundred yards of the president as he stood outside the golf course’s hotel on Friday evening. Trump moved inside calmly as the parachute approached, surrounded by his security detail. British Trade Secretary Liam Fox said anti-Trump protesters were an embarrassment to themselves as they had shown bad manners to the leader of the free world. Around 100 supporters of Trump, some wearing “Make Britain Great Again” hats, expressed their admiration for the president opposite the US embassy in London.