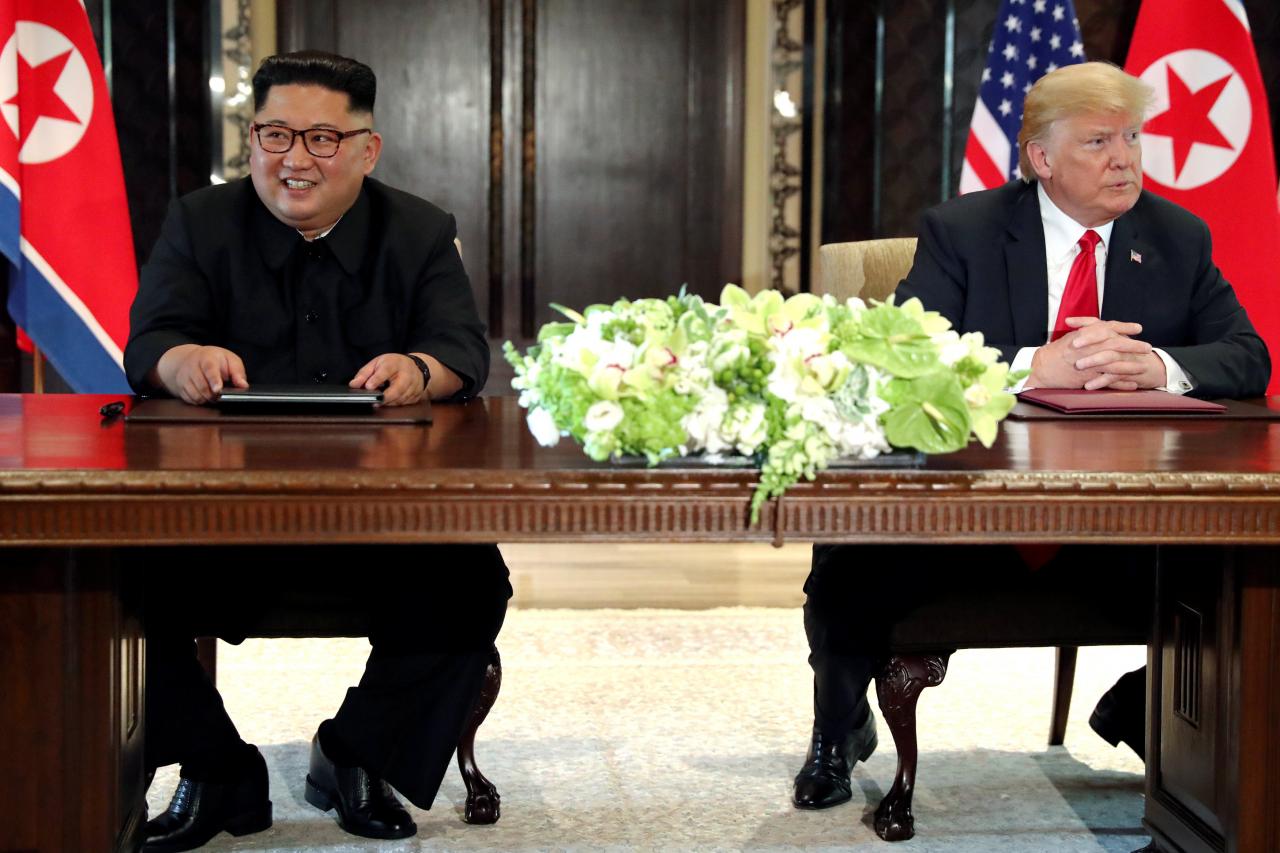 WASHINGTON (Reuters) - US President Donald Trump on Friday said he wished people would “sit up at attention” for him like North Koreans do for their leader Kim Jong Un, a joke that sparked instant outrage on social media and cable news. It was the latest example of a Trump remark about strongmen leaders - delivered in a deadpan style - to fall flat and fuel perceptions among his critics that the president admires autocrats. Trump was asked during a Fox News Channel interview outside the West Wing if he would invite Kim to the White House. The two met earlier this week to begin to discuss Pyongyang’s nuclear program, a summit marked by what Trump said was friendly chemistry between them. Trump indicated a White House visit by Kim was possible: “Hey he’s the head of a country,” Trump said. “He speaks and his people sit up at attention. I want my people to do the same,” Trump said, pointing to the West Wing. Kim is suspected of ordering the assassination of his half-brother in February and the execution of his uncle in 2013. U.N. investigations have also reported human rights violations, the use of political prison camps and the widespread use of starvation as a tool to enforce political loyalty. Trump was later asked by reporters what he meant by the remark. “I’m kidding. You don’t understand sarcasm,” Trump said. The joke was reminiscent of one he made at a private dinner with donors in March, when he noted that Chinese President Xi Jinping no longer faced term limits. “I said, ‘President for life. That sounds good. Maybe we are going to have to try it,’” he later said, recounting the outrage that followed. “But I’m joking,” he said, complaining about the reaction. “I’m joking about being president for life.” At a rally in February, he said Democrats in Congress were treasonous because they did not clap at his State of the Union speech. White House spokeswoman Sarah Sanders later said he didn’t mean it: “The president was clearly joking with his comments,” she said. Trump’s controversial quips draw fire from the quick-to-tweet media because they feed into a caricature created by his opponents, said Chris Barron, a pro-Trump Republican strategist. “They believe that Trump is somehow this autocratic despot and they’re waiting for any words that fill in that narrative,” Barron said in an interview. “If Trump says something and it can be read two ways, immediately the benefit of the doubt is against Trump,” he said. But David Litt, a speechwriter to former President Barack Obama, said blaming the listener for not getting the joke is a way to avoid responsibility for going too far. There are some topics that presidents should just not joke about publicly lest they make allies nervous or embolden adversaries, Litt told Reuters. “Maybe Donald Trump is the kind of dry, deadpan humorist who does great material about how terrific dictators are - but if that’s the case, he should wait until he retires as president to start breaking out that particular part of his act,” Litt said.