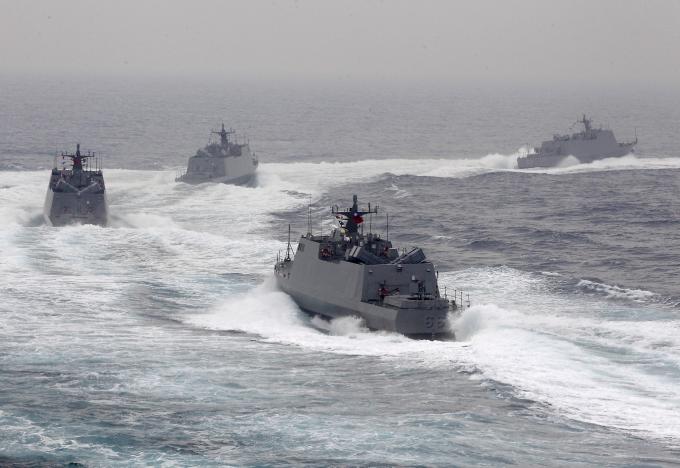 TAIPEI - Before getting too carried away with Taiwan's elevated status under a Donald Trump presidency, President Tsai Ing-wen might want to check her bank balance. Trump's suggestion that the "one China" principle – that Taiwan is a part of China – was up for negotiation has already prompted sabre-rattling from Chinese state media and some in the military establishment. Taipei's ability to mitigate any military action by China will be severely limited by its weak economy and a tiny domestic arms industry that will take years to build up. And even if the United States - Taiwan's sole arms supplier – agrees to sell the advanced weaponry the island needs to deter a Chinese attack, Taipei will struggle to pay the bill, government advisers and experts say. "The trend in defence spending is a 'slow rise'," said Chieh Chung, a long-time defence expert and researcher with the National Policy Foundation in Taipei, a think tank. "There isn't a lot of flexibility in government finances." The ability of Taiwan to defend itself, and the willingness of the United States to help it, have been brought into sharp relief since President-elect Trump accepted an unprecedented phone call from President Tsai early this month. Tsai has never conceded the "one China" principle and Beijing has never renounced the use of force to take back what it deems a wayward province, particularly if Taiwan makes moves toward independence. Despite that threat, Taiwan has spent less than 2 percent of its half-a-trillion dollar economy on its defence needs in recent years, leaving it woefully unable to match a free-spending China militarily. US-based think tank the Rand Corporation said in a research report last year the United States would find it far more challenging to come to Taiwan’s aid in the event of an attack now compared to two decades ago, due to rapid advances in Chinese capabilities. In 1996, only two US air wings would have been need to achieve air superiority at the outset of a conflict, but by 2017 that rises to 30, the report said. ARMS SALES Selling arms might be more palatable, and there is certainly a need. Two of Taiwan's four submarines date to World War Two, while the two other Dutch-built boats have been in service for nearly 30 years. But Chieh estimates submarines would cost Taiwan more than $2 billion (1.6 billion pounds) each, requiring a special budget fundraising via government bonds - a more expensive prospect in a rising interest rate environment. Any arms sale would also risk provoking Beijing. Retired Major-General Luo Yuan, a widely read Chinese military figure, told Hong Kong’s Phoenix Television on Monday that Taiwan buying US arms could be considered a hostile act. "If you want to buy one set of anti-missile systems from the United States, then we’ll set up four in response on the other side of the Taiwan Strait, so that you will know pain, that you can’t buy security, and that what you’re actually buying is danger,” he said. INDIGENOUS DEFENCE INDUSTRY Buying big-ticket items like subs would also be a tough sell at home because Tsai has made developing an indigenous defence industry a key policy plank to create jobs and pump up the sluggish economy, currently growing at less than 2 percent. Taiwan has previously developed its own missiles and also manufactured over 100 of its own fighter jets in the 1990s before the programme withered. The navy has just begun programmes to build a few small warships, and next on Taiwan's list are submarines and advanced jet trainers. But critics say it will take years to build a battle-ready fleet, costs would likely be higher than buying second-hand equipment and there is almost no export market to sustain programmes for Taiwanese defence goods. Taiwan's reliance on the United States is therefore key. "Beijing knows that we have obligations to help Taiwan defend itself and resist coercion, as enshrined in the Taiwan Relations Act, and that we make decisions about our defence relationship with Taiwan based on the threat that China poses," said Daniel Blumenthal, director of Asian Studies at the American Enterprise Institute, and a former US defence official. Trump's campaign rhetoric, however, indicated he may be less likely to go to war over someone else's defence while recent comments suggest Taiwan may be a pawn in his trade negotiations with China. Madeleine Bordallo, a member of the US House of Representatives Armed Services Committee, says throwing China a "curve ball" will make Beijing think twice about issues such as Taiwan. Bordallo backed a defence bill supporting senior military exchanges between the United States and Taiwan that was approved by Congress this month. "I believe that different types of engagement with Taiwan offer us a way to throw that curve ball in the coming years," she told an audience at a security conference in Taipei this week. "Further engagement with Taiwan is important to achieving the strategic goal." -Reuters