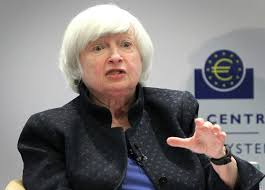 NEW YORK (AFP) - President Donald Trump's promised rollback of banking regulation is well underway, with vacancies at the top of key agencies and new legislation in the works. Since the start of his presidency, Trump has decried the financial rules and regulations put in place to combat the excesses that led to the financial crisis through the Dodd-Frank Wall Street reform legislation of 2010. "We expect to be cutting a lot out of Dodd-Frank because, frankly, I have so many people, friends of mine, that have nice businesses that can't borrow money," he said in February. And Trump will have an unprecedented opportunity in coming months to reshape the agencies in charge of regulation, as he fills key positions. At the Federal Reserve, which has a central role in regulating banks, he will have the opportunity to fill at least three of the seven seats on the central bank's board. He recently named a successor for Fed chair Janet Yellen, tapping former investment banker and current Fed Governor Jerome Powell. In the latest critical development, Richard Cordray, the first director of the Consumer Financial Protection Bureau (CFPB) who had long been in the banking industry's crosshairs, announced last week he would step down by the end of the month, several months early. The Senate also last week confirmed Joseph Otting, a banking executive and associate of Treasury Secretary Steven Mnuchin, with decades at major commercial lenders, as the new head of the Treasury's Office of the Comptroller of the Currency, a principal banking regulator. Likewise, the Securities and Exchange Commission, a markets regulator that polices Wall Street's biggest banks, is now led by a Trump appointee. Senior SEC officials have signaled this year they may shift away from the aggressive prosecutorial approach of the previous administration and early signs are that enforcement activity, particularly for financial institutions, has fallen. 'Different tone' Even as these personnel changes remain in the future, the industry already is experiencing a "different tone" and an "industry-friendly approach" from government, according to Wayne Abernathy, a senior executive at the American Bankers Association. In an interview, Abernathy said he expected the Fed under Powell to move more quickly down the path already forged by Yellen. "He will be accelerating the process of reforms which she had already begun," he said. While the Fed may have shown willingness to modify some financial oversight, especially those that were very onerous for smaller banks, observers said Yellen hurt her chances of winning a second term by forcefully defending Dodd-Frank regulations in an address over the summer. "Any adjustments to the regulatory framework should be modest and preserve the increase in resilience at large dealers and banks associated with the reforms put in place in recent years," she said at the time. Mnuchin, a former Goldman Sachs banker, early in the administration promised regional banks he would work to set a new tone in regulation. Since then, Treasury has produced three reports calling for a whittling down of rules imposed on mid-size banks, a scaling back of stress tests and a restructuring of the CFPB. Republicans have long deemed the bureau too far outside political control, saying it waters down of the so-called Volcker Rule, which limits certain speculative trading with a bank's own funds. "They'll get away with everything they can," said economist Dean Baker, co-founder of the Center for Economic and Policy Research, about the regulatory rollback. "It's just going in the wrong direction, again allowing abuses that might not threaten the stability of the financial system but just will be a waste and possibly hurt people," he told AFP. Barney Frank isn't worried Another flashpoint has been the Dodd-Frank capital requirements imposed on major financial institutions, those deemed "too big to fail" because their bankruptcies would endanger the financial system and wider economy. These requirements are "very expansive and very complex," Abernathy said. In some areas, such as easing rules for smaller banks, there is greater consensus, and even buy-in from Democrats. Senators from both parties early last week announced an agreement on proposed reforms to ease the burdens of compliance that regional banks face. In another move greeted favorably by industry, regulators expect to require banks to submit so-called living wills -- or plans for how they would be dismantled in the event of failure -- every two years instead of annually. Even with the changes, however, retired congressman Barney Frank, whose name is on the Dodd-Frank reform legislation, said he was not concerned that deregulation could cause turmoil. "There are negotiations going on now for small adjustments for smaller banks, medium banks but I'm for it," he told AFP. "There will be no legislative changes in the framework except for minor ones that Democrats agree to," said Frank, adding that the Republicans "don't have the votes."