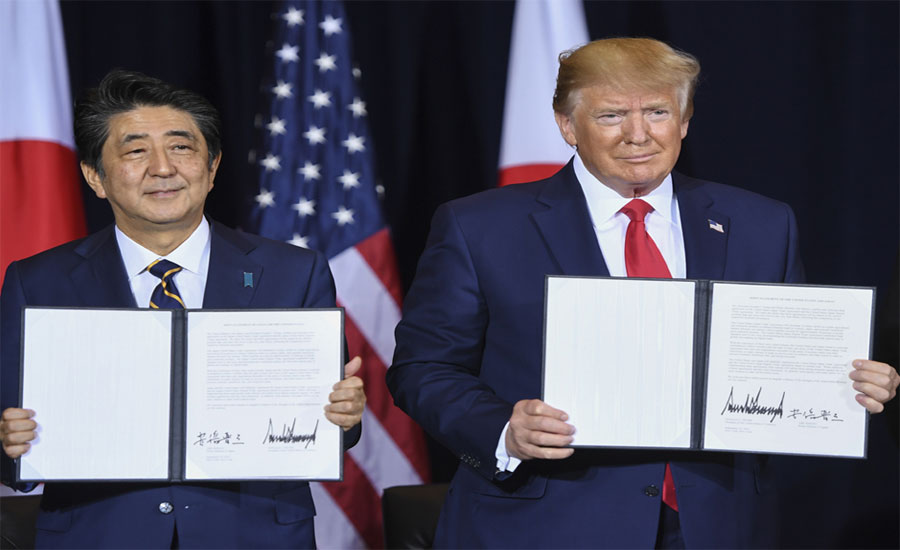 UNITED NATIONS (Reuters) - US President Donald Trump and Japanese Prime Minister Shinzo Abe announced initial details of an emerging trade deal between the two countries on Wednesday, with Trump saying it would open up Japanese markets to $7 billion (5.7 billion pounds) worth of American products. US Trade Representative Robert Lighthizer said after a signing ceremony between the two leaders on the sidelines of the United Nations General Assembly that cars - the biggest source of the $67 billion US trade deficit with Japan - were not covered in the announcement. He said Japan wanted further discussions on this issue. Lighthizer said it was not the US intention to impose so-called Section 232 national security tariffs on Japan and the two sides would work together in good faith, aiming to start talks on phase two of an agreement next April. Trump said at the signing ceremony with Abe that the deal’s first phase would cover $40 billion worth of digital trade between the world’s largest and third-largest economies. Negotiators for the two sides will continue talks, Trump added. The two leaders did not mention Trump’s previous threats to impose US tariffs on Japanese autos. The talks hit a last-minute snag earlier this week as Japan had sought last-minute assurances that Trump would not impose Section 232 tariffs on Japanese cars and parts while negotiations continue. The US Trade Representative’s office characterized the agreement signed by Trump and Abe an “early achievements” from their negotiations on market access for agriculture, industrial goods and digital trade. “Under the market access agreement we’re announcing today, Japan will open new markets to approximately $7 billion in American agricultural products. Japanese tariffs will now be significantly lower or eliminated entirely for US beef, pork, wheat, cheese, corn, wine and so much more,” Trump said at the ceremony. The USTR said about 90 percent of US food and agricultural products will receive duty-free or reduced-tariff access to Japan, but wheat will still be subject to a quota limiting the volume of US imports. However, many of the products gaining new access will still face tariffs that phase out over several years. Japan will see reduced or eliminated tariffs on a small amount of agricultural goods, including cut flowers and soy sauce, and a wide range of industrial goods, including machine tools, steam turbines, bicycles and musical instruments. The digital trade agreement largely follows the US model of internet development, prohibiting taxes on cross-border digital downloads as well as rules requiring data localization - storing data on devices physically present within a country’s borders - including for financial services, USTR said.