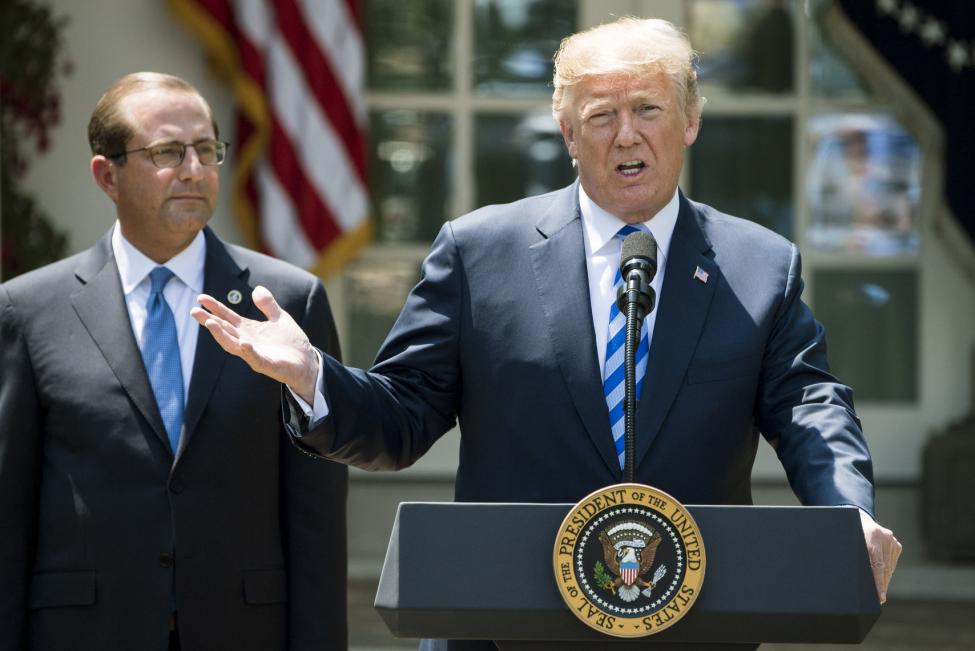 WASHINGTON/NEW YORK (Reuters) - US President Donald Trump, taking aim at “global freeloading,” said on Thursday his administration would seek to lower prescription drug prices by basing what the government’s Medicare program pays for some medications on the lower prices paid in other countries.
Under the proposed rule, the government would create an “international pricing index” to help Medicare pay prescription drug prices that are more closely aligned with those of other countries. The government health insurance program for the elderly and disabled covers more than 40 million Americans. “We’re taking aim at the global freeloading that forces American consumers to subsidize lower prices in foreign countries through higher prices in our country,” Trump said in a speech at the Department of Health and Human Services. “The world reaps the benefit of American genius,” said Trump, who has pledged to lower prescription drug prices. Healthcare and high prescription drug prices have consistently polled as top voter concerns ahead of Nov. 6 elections where Trump’s Republicans are battling to maintain control of Congress. The administration said it did not plan to propose the rule until next spring, and would begin implementing it in 2020 over a five-year period. Enacting the rule does not require congressional approval, but it was met with swift opposition from drugmakers and would likely be challenged by many stakeholders in the healthcare industry. By law, the Medicare program cannot negotiate drug prices. Under the Trump administration proposal, private-sector vendors would negotiate down drug prices and supply the medicines to doctors and hospitals. HHS said the proposed rule would cover most of the drugs in Medicare’s Part B, which includes expensive physician- administered drugs such as infusions. According to HHS projections, the rule, if it took full effect, would save $17.2 billion over five years, which would benefit the federal government and Medicare beneficiaries. Trump has criticized foreign governments with single-payer healthcare systems, such as the UK and France, that are able to negotiate prices directly with drug companies and often pay far less for the same medications than the United States. The United States does not directly negotiate drug prices with manufacturers and American consumers often pay the highest prices for drugs. The Trump administration has said US drug prices and manufacturer revenues are subsidizing lower prices in other countries. In a briefing with reporters on Thursday, HHS Secretary Alex Azar said the administration planned to first test the rule in 50 percent of the country, applying it to drugs in Part B that have a single manufacturer. The proposed rule would also eliminate an add-on payment that physicians receive from Medicare that the administration and critics say encourages the prescribing of higher-priced drugs.

Previous similar attempts at such rules in Medicare have come up against fierce industry opposition and failed to take effect. Shortly after Trump’s speech, pharmaceutical industry lobby group PhRMA said it opposed the changes, which it said would limit access to drugs for cancer and chronic conditions like rheumatoid arthritis. “The administration is imposing foreign price controls from countries with socialized health care systems that deny their citizens access and discourage innovation,” PhRMA Chief Executive Stephen Ubl said in a statement. Democrats questioned the timing of the administration’s proposal and expressed skepticism it would come to fruition. “It’s hard to take the Trump administration and Republicans seriously about reducing health care costs for seniors two weeks before the election,” Democratic Senate Minority Leader Chuck Schumer said in a statement. The United States spent nearly $26 billion for Medicare Part B drugs in 2016, the most recent year for which data is available. The top drugs that year were Regeneron Pharmaceuticals Inc’s chemotherapy drug Eylea, Roche Holding AG’s cancer and rheumatoid arthritis treatment Rituxan and Amgen Inc’s Neulasta, which helps reduce the risk of infection during cancer treatment. Medicare spending on the three drugs alone totaled more than $4 billion. Representatives from the three companies did not immediately respond to requests for comment on the plan. Shares of US drugmakers opened trading down early on Thursday, as Politico had reported details of the plan overnight. But shares recovered later in the day, and the ARCA pharmaceutical index was up about 1.8 percent on Thursday afternoon.