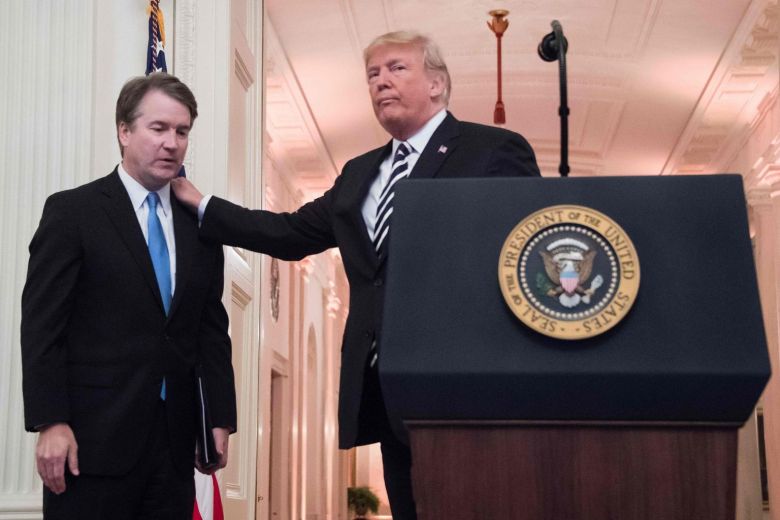 COUNCIL BLUFFS, Iowa (Reuters) - US President Donald Trump on Tuesday used the bitter Senate confirmation battle for Supreme Court Justice Brett Kavanaugh to try to boost Republican voter enthusiasm and prevent a Democratic takeover of Congress in the Nov. 6 elections.
At a political rally in support of Iowa and Nebraska Republicans, Trump called the Democrats’ attempt to block Kavanaugh from the high court “a national embarrassment, a national disgrace,” without mentioning the sexual assault accusation raised by Christine Blasey Ford when she and Kavanaugh were high school students in 1982. “They wanted to destroy that man. Of course, they want to destroy me too,” Trump told a cheering crowd at an arena in Council Bluffs, Iowa, a city near Omaha, Nebraska. “In just four weeks, you will have the chance to render your verdict on the Democrats’ outrageous conduct,” he added. Trump staged a ceremonial swearing-in ceremony for Kavanaugh on Monday night at the White House, apologising to him and his family for the contentious confirmation process. Kavanaugh was confirmed 50-48 by the Senate on Saturday, with just one Democrat supporting him. At his Iowa event, Trump said a Democratic takeover of Congress could allow Democrats to impeach Kavanaugh, a prospect some Democrats have raised. “The Democrats are even talking about doing really bad things now to Justice Kavanaugh,” said Trump. “You know what they’re talking about and packing their courts with radical judges to overrule the will of the American people. It’s not going to happen folks.” Mocking some Democrats on the Senate Judiciary Committee who pressed the case against Kavanaugh, Trump said: “The Democrats have become too dangerous to govern. They’ve become wacko.” Opinion polls show Democratic voters are more enthusiastic about voting in the congressional elections, but Republicans have narrowed the gap in recent weeks and are using the Kavanaugh battle to try to get their voters excited about turning out. The party that holds the White House typically loses seats in midterm congressional elections. Many analysts predict Democrats will be able to take control of the House of Representatives, but it is far from clear if they can also capture the Senate. A Democratic takeover of Congress could expose Trump to impeachment investigations and lead to multiple probes into his administration just as he prepares for his own re-election fight in 2020. Trump is travelling to key states and raising millions of dollars for Republican congressional candidates.