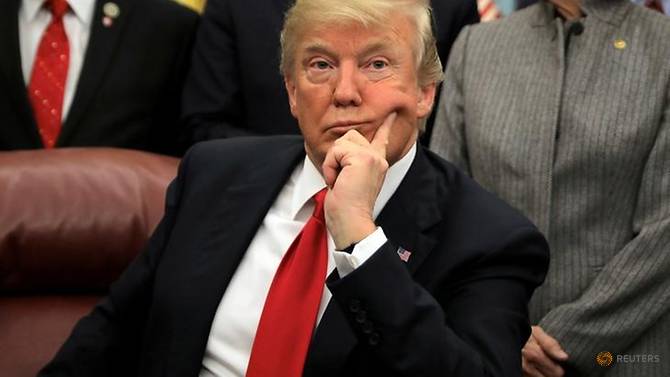 WASHINGTON (Reuters) - President Donald Trump will announce tariffs on Chinese imports on Thursday, a White House official said, in a move aimed at curbing theft of US technology and likely to trigger retaliation from Beijing and stoke fears of a global trade war. There was no indication of the size and scope of the tariffs, which US Trade Representative Robert Lighthizer said on Wednesday would target China’s high-technology sector and could also include restrictions on Chinese investments in the United States. Other sectors like apparel could also be hit. “Tomorrow the president will announce the actions he has decided to take based on USTR’s 301 investigation into China’s state-led, market-distorting efforts to force, pressure, and steal US technologies and intellectual property,” the official said. The White House said Trump would sign a presidential memorandum “targeting China’s economic aggression” at 12:30 p.m. (1630 GMT) on Thursday. The investigation by the United States under Section 301 of the 1974 Trade Act has identified theft from and coercion of US companies to disclose their intellectual property as well as purchases by Chinese state funds of US companies for their technology knowledge. Lighthizer told the House of Representatives Ways and Means Committee, a top economic panel, that the aim would be to minimize the impact of any tariffs on US consumers. China has threatened to retaliate by hitting US agricultural exports if tariffs on Chinese imports worth up to $60 billion (£42.5 billion) are announced by Washington. “The remedies, in my judgment at least, would be one, doing something on the tariff front, and two, doing something on the investment front, and then perhaps other things,” said Lighthizer, a lawyer and veteran trade negotiator. The United States runs a hefty goods trade deficit with China of $375 billion. Estimates of the cost of counterfeit goods, pirated software and theft of trade secrets could be as high as $600 billion, according to one study. Talk of a global trade war emerged earlier this month when Trump announced hefty tariffs on steel and aluminium imports, aimed at hitting Chinese overproduction, but which could also affect key allies like members of the European Union. Lighthizer conceded that China would likely hit back with measures on US agricultural exports, particularly soybeans, and said if that happened, Washington would impose “counter-measures,” although he said that “nobody wins from a trade war,” a stance that appeared to put him at odds with Trump who has termed trade wars “good and easy to win”. Since taking office, Trump has taken a hard line on trade, abandoning a 14-nation Pacific trade pact and threatening to pull out of the North American Free Trade Agreement with Canada and Mexico. He has also attacked Germany, saying it hides behind tariffs to win an export advantage for its car industry. The administration has been forced to walk back some of its steel and aluminium measures, granting exemptions to Canada and Mexico and entering talks with the European Union and others to discuss potential exemptions. CHINA STEELS ITSELF FOR RESPONSE China has already identified agriculture as a US weak point and has said it would target soybeans, a $14 billion-a- year business. America’s farm states heavily backed Trump in his presidential election win. “China does not want to fight a trade war with anyone. But if anyone forces us to fight one, we will neither be scared nor hide,” Foreign Ministry spokeswoman Hua Chunying said. “If, in the end, the United States takes actions that harm China’s interests then China will have to take resolute and necessary steps to respond to protect our legitimate interests.” The European Union’s response to the threat of steel and aluminium tariffs also targeted areas where Republicans are vulnerable, threatening Harley-Davidson motorcycles, which are made in House Speaker Paul Ryan’s home state of Wisconsin. While China has stepped up its rhetoric, it is far from clear that Beijing is ready to take the next step and move to an economic confrontation that would pit the world’s two leading economic powers against each other. Financial markets reacted to the Trump steel and aluminium tariffs with an initial sharp sell-off, although they have since regained their poise. A global trade war would have much harsher economic consequences, possibly hitting the dollar, US stock markets and currencies as varied as the Mexican peso and the Australian dollar, according to analysis from investment bank Morgan Stanley. A targeted use of Section 301 that covered $60 billion of Chinese high-tech products could see a response from China that is relatively muted, the bank said in a report, with agriculture and transport equipment being hit in return, “This would have a moderate impact on growth in both the US and China,” it said. The risk of an escalation in which there were a broad-based tariff across a range of Chinese goods followed by a response from Beijing that was commensurate with that would cause a hit to US and Chinese growth, a rise in US inflation and possibly prompt China to take domestic action to boost growth.