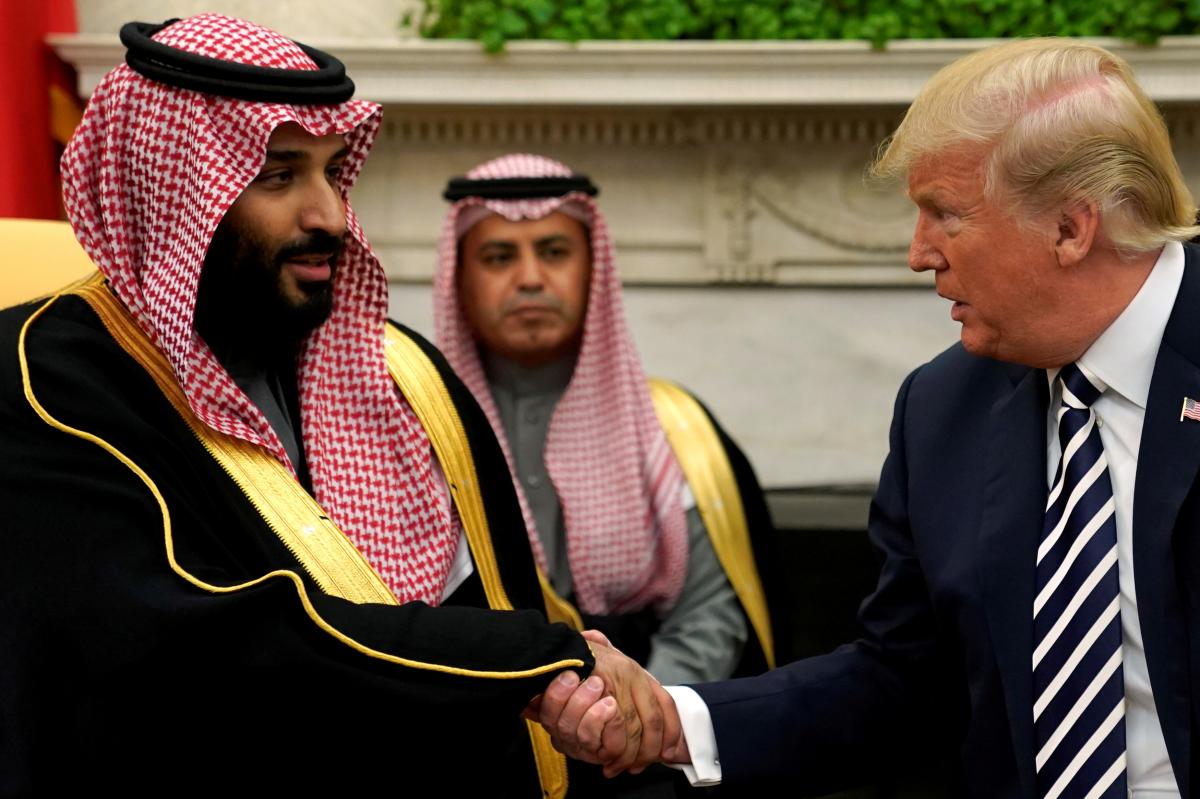 WASHINGTON (Reuters) - President Donald Trump vowed on Tuesday to remain a “steadfast partner” of Saudi Arabia despite saying that Saudi Crown Prince Mohammed bin Salman may have known about the plan to murder dissident journalist Jamal Khashoggi last month. Defying intense pressure from US lawmakers to impose tougher sanctions on Saudi Arabia, Trump also said he would not cancel military contracts with the kingdom. He said it would be a “foolish” move that would only benefit Russia and China, competitors of the United States in the arms market. Trump said US intelligence agencies were still studying the evidence around Khashoggi’s killing inside the Saudi consulate in Istanbul on Oct. 2 and who planned it. Since the murder, Trump has taken varying positions on how to react, including possible sanctions. But on Tuesday, Trump stressed Saudi Arabia’s weapons purchases and its role in keeping world oil prices low as influencing his decision. “It’s all about, for me, very simple. It’s America first,” Trump said, adding: “I’m not going to destroy the world economy and I’m not going to destroy the economy for our country by being foolish with Saudi Arabia.” Speaking at the White House to reporters before departing for Florida, Trump said of the possibility that the Saudi crown prince had a hand in the murder: “Maybe he did, maybe he didn’t” and argued that the CIA had not made a definitive determination. His comments contradicted the CIA, which believes Khashoggi’s death was ordered directly by the crown prince, Saudi Arabia’s de facto ruler widely known by his initials MbS. Trump was accused by Democratic lawmakers of undermining his own intelligence agencies and failing to confront Saudi Arabia over a human rights atrocity. “Human rights is more than just a phrase, it has to mean something. And that means standing up and condemning a brazen murder by a foreign government. Everyone who played a role in this killing must be held accountable,” Senator Dianne Feinstein said. Democratic and Republican lawmakers have urged Trump to drop his support for MbS over the Khashoggi case, but the president has been reluctant. Trump said on Tuesday that both Saudi Arabia’s King Salman and MbS “vigorously deny any knowledge of the planning or execution of the murder,” and that the truth may never be known. After offering numerous contradictory explanations for Khashoggi’s disappearance, Riyadh said last week he had been killed and his body dismembered when “negotiations” to convince him to return to Saudi Arabia failed. It said allegations the prince had ordered the killing were false. Turkish Foreign Minister Mevlut Cavusoglu said in Washington on Tuesday that Turkey was not entirely satisfied with the level of cooperation it was receiving from Riyadh on Khashoggi’s murder and may seek a formal United Nations inquiry. Republican and Democratic leaders of the U.S. Senate Foreign Relations Committee said they had asked Trump for a second human rights probe over Khashoggi’s killing. Similarly, Representative Francis Rooney, a Republican on the House Foreign Affairs Committee, said Washington should apply the so-called Magnitsky Act to those responsible for Khashoggi’s death. The law freezes U.S. assets of human rights violators and prohibits Americans from doing business with them.

Trump said Saudi Arabia, a major oil producer, was an important business partner and a “great ally” in the fight against Iranian power in the Middle East. “The United States intends to remain a steadfast partner of Saudi Arabia to ensure the interests of our country, Israel and all other partners in the region,” Trump said. On Twitter, Iranian Foreign Minister Mohammad Javad Zarif said of a White House statement: “Mr. Trump bizarrely devotes the FIRST paragraph of his shameful statement on Saudi atrocities to accuse IRAN of every sort of malfeasance he can think of.” U.S. Representative Adam Schiff, who is expected to become leader of the House of Representatives Intelligence Committee in January, said the United States should immediately end support for Saudi Arabia in the Yemen war, suspend arms sales and reduce its reliance on Riyadh in the Middle East. Khashoggi, a critic of the Saudi government, lived in the United States and was a Washington Post columnist. He went to the consulate to collect documents for a planned marriage.

BROAD BACKING FOR A US RESPONSE

Trump has placed the alliance with Saudi Arabia at the heart of his Middle East policy, and it was the first country he visited after becoming president in 2017. Trump’s son-in-law and adviser, Jared Kushner, has developed a close relationship with MbS. Republican Senator Lindsey Graham, a sometime Trump ally, said there would be bipartisan support for sanctions against Saudi Arabia, “including appropriate members of the royal family, for this barbaric act which defied all civilized norms.” Representative Eliot Engel, who has the power to block arms deals as the top Democrat on the House Foreign Affairs Committee, said Washington should use its ability to sell weapons to the Saudis as leverage to influence Riyadh’s behavior. “The reality is that the Saudis couldn’t simply buy their weapons somewhere else,” Engel said in a statement. “It would take years for the Saudi military to re-equip with Russian or Chinese weapons.” When Trump mentions the $110 billion package with Riyadh last year, he often adds that “it’s 500,000 jobs.” But arms manufacturer Lockheed Martin Corp predicts the deal could create nearly 10,000 jobs in Saudi Arabia, while keeping up to 18,000 existing U.S. workers busy if the whole package comes together - an outcome industry experts say is unlikely. Asked on Tuesday whether he was putting personal business interests over those of the United States, Trump said: “I have nothing to do with Saudi - just so you understand, I don’t make deals with Saudi Arabia. I don’t have money from Saudi Arabia.” At a political rally in 2015, however, Trump said: “I like the Saudis, they’re very nice. I make a lot of money with them. They buy all sorts of my stuff, all kinds of toys from Trump. They pay me millions and hundreds of millions.”