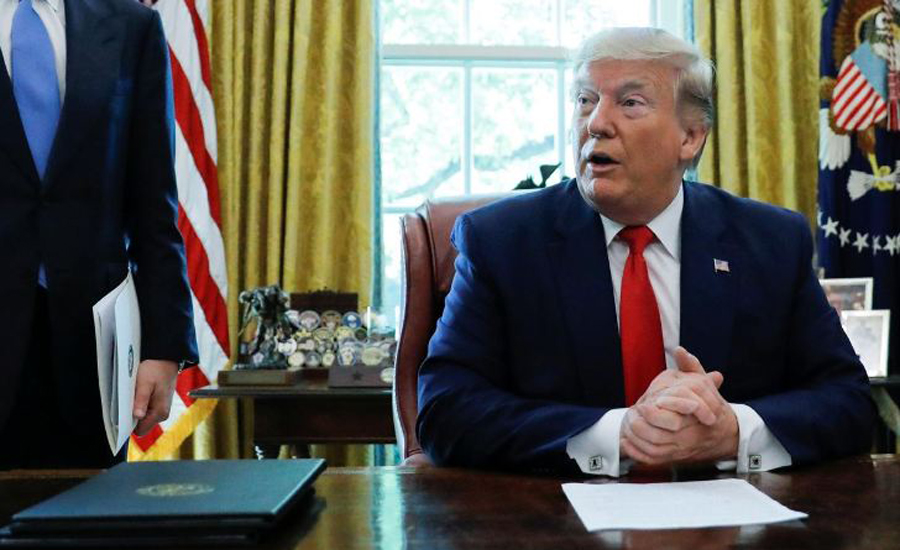 WASHINGTON/DUBAI (Reuters) - US President Donald Trump threatened on Tuesday to obliterate parts of Iran if it attacked “anything American” after Tehran said the latest U.S. sanctions had scuttled any chance of diplomacy, calling White House actions “mentally retarded”. Trump on Monday signed an executive order imposing sanctions against Iranian Supreme Leader Ayatollah Ali Khamenei and other senior figures, with punitive measures against Foreign Minister Mohammad Javad Zarif expected later this week. The moves came after Iran shot down a U.S. drone on June 20 and Trump called off a retaliatory air strike minutes before impact, saying too many people would have been killed. It would have been the first time the United States had bombed the Islamic Republic in four decades of mutual hostility. On Tuesday, however, Trump tweeted: “Any attack by Iran on anything American will be met with great and overwhelming force. In some areas, overwhelming will mean obliteration.” Shortly before, Iranian Foreign Ministry spokesman Abbas Mousavi said imposing “useless sanctions” on Khamenei and Zarif would mark “the permanent closure of the path of diplomacy ... He added in a tweet: “Trump’s desperate administration is destroying the established international mechanisms for maintaining world peace and security.” In a televised address on Tuesday, Iranian President Hassan Rouhani said the new sanctions against Khamenei would have no practical impact because the top cleric had no assets abroad. Rouhani, a pragmatist who won two elections on promises to open Iran up to the world, said the White House’s actions were “mentally retarded” - an insult that other Iranian officials have used in the past about Trump, but a departure from Rouhani’s own comparatively measured tone over the years. “Tehran’s strategic patience does not mean we have fear,” said Rouhani, who with his cabinet runs Iran’s day-to-day affairs while Khamenei, in power since 1989, is the country’s ultimate authority.

The United States has imposed crippling financial sanctions against Iran since last year when Trump withdrew from a 2015 deal between Tehran and world powers under which it curbed its nuclear programme and won a removal of sanctions in return. The crisis has escalated sharply since last month when the Trump administration tightened its sanctions noose, ordering all countries to halt purchases of Iranian oil. That has effectively starved the Iranian economy of the main source of revenue Tehran uses to import food for its 81 million people, and left the pragmatic wing of Iran’s leadership, led by Rouhani, with no benefits to show for its nuclear agreement. Trump says the accord reached under his predecessor Barack Obama was a failure because its terms were not permanent and did not cover security issues beyond the nuclear programme, such as missiles and role in various Middle East conflicts. The downing of the U.S. drone - which Iran says was over its air space and the United States says was international skies - followed weeks of rising tensions that had begun to take on a military dimension. The United States and some regional allies have blamed Iran for explosions that damaged tankers in the Gulf, which Tehran denies. Washington’s European allies have repeatedly warned both sides of the danger that a small mistake could lead to war. Russian Foreign Minister Sergei Lavrov said the situation around Iran was developing toward a dangerous scenario, RIA news agency reported. Trump’s hawkish national security adviser, John Bolton, visiting Israel, repeated earlier offers to hold talks, as long as Iran was willing to go beyond the terms of the 2015 deal. “The president has held the door open to real negotiations to completely and verifiably eliminate Iran’s nuclear weapons programme, its pursuit of ballistic missile delivery systems, its support for international terrorism and other malign behaviour worldwide,” Bolton said in Jerusalem. “All that Iran needs to do is to walk through that open door.” He added: “They’ll either get the point or ... we will simply enhance the maximum pressure campaign further.”

Tehran has said it still aims to comply with the nuclear deal, but cannot do so indefinitely unless it receives some benefits. It has given European countries until July 8 to find a way to shield its economy from US sanctions, or else it will enrich uranium to higher levels banned under the deal to help ensure no development of a nuclear weapon results. Iran says there is no point negotiating with Washington when it has abandoned a deal that was already reached. But with little sign of European powers meeting Iran’s demand, Ali Shamkhani, secretary of Iran’s Supreme National Security Council, said on Tuesday Tehran would take new steps to scale back its commitments under its nuclear deal on July 7. In response, French Foreign Minister Jean-Yves Le Drian warned Iran that such a step would be a serious mistake and that France, Britain and Germany were making it clear to Tehran that it was not in its interest to do so. Washington says forcing Iran to the table is the purpose of its sanctions. Tehran has said it is willing to talk if the United States lifts the new sanctions first, although Tuesday’s statements appear to toughen that stance. Trump is leaving a path open to diplomacy with Iran but Tehran would be making a mistake if it interprets his restraint over the downing of a drone as weakness, U.S. disarmament ambassador Robert Wood told a conference in Geneva. “We will not initiate a conflict against Iran, nor do we intend to deny Iran the right to defend its airspace but if Iran continues to attack us, our response will be decisive,” he said.