Trump to visit Israel in search of revived peace process 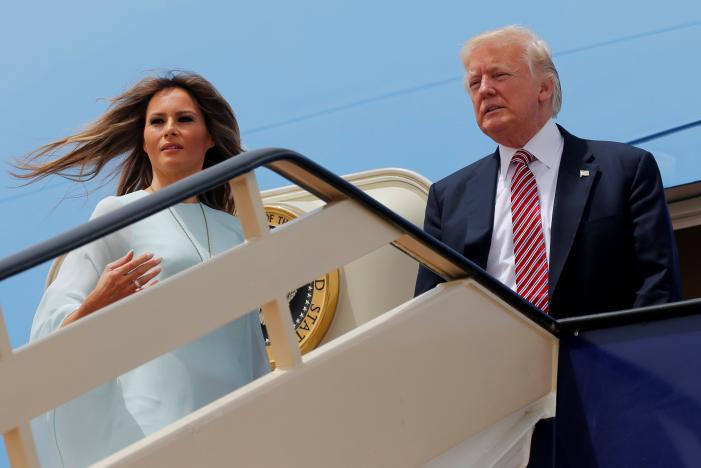 Trump to visit Israel in search of revived peace process

RIYADH - After an exhausting two days in Saudi Arabia, US President Donald Trump travels to Israel on Monday, attempting to revive the stalled Israeli-Palestinian peace process with visits to Jerusalem and the West Bank.

Over two days, Trump is to meet separately with both Israeli Prime Minister Benjamin Netanyahu and Palestinian President Mahmoud Abbas and visit holy sites. On Monday in Jerusalem, he will pray at the Western Wall and visit the Church of the Holy Sepulchre.

On his maiden foreign tour since taking office in January, Trump is already showing signs of fatigue from a packed schedule. He is on a nine-day trip through the Middle East and Europe that ends on Saturday after visits to the Vatican, Brussels and Sicily.

During a speech in Riyadh on Sunday in which he urged Arab and Islamic leaders to do their share to defeat militants, Trump referred to "extremism," although advance excerpts had him saying "extremism."

On Sunday night in Riyadh after a long day of events, many of them delayed, he skipped a "tweeps" forum for young people that was to be his last activity of the day, sending daughter Ivanka in his place.

Over the weekend, Trump received a warm welcome from Arab leaders, who focussed on his desire to crack down on Iran's influence in the region, a commitment they found wanting in the Republican president's Democratic predecessor, Barack Obama.

The reception marked a contrast from his difficulties at home where he is struggling to contain a mushrooming scandal after his firing of former FBI Director James Comey nearly two weeks ago.

Trump has vowed to do whatever is necessary to broker peace between Israel and the Palestinians, but has given little sign of how he could revive long-stalled negotiations.

When he met Abbas earlier this month in Washington, he stopped shortly of explicitly recommitting his administration to a two-state solution to the decades-old conflict, a long-standing foundation of US policy. Some Palestinians said they were disappointed by the omission.

Trump has also opted against an immediate move of the US Embassy in Tel Aviv to Jerusalem, a longtime demand of Israel.

A senior administration official told Reuters last week that Trump remained committed to his campaign pledge to ultimately relocate the embassy but did not plan to announce such a move while on his trip.

"We're having very good discussions with all parties and as long as we see that happening, then we don’t intend to do anything that we think could upset those discussions," the official said.

On Sunday, Israel authorised some economic concessions to the Palestinians that a Cabinet statement said "will ease daily civilian life in the Palestinian Authority after (Trump) who arrives tomorrow, asked to see some confidence building steps."

Trump used his visit to Riyadh to bolster US ties with Arab and Islamic nations, announce $110 billion in US arms sales to Saudi Arabia, and send Iran a tough message.

In his speech attended by dozens of Arab and Islamic leaders, he toned down the harsh anti-Muslim rhetoric he had employed during the presidential campaign last year in favour of trying to gain cooperation against militants.

"A better future is only possible if your nations drive out the terrorists and drive out the extremists. Drive them out," Trump said. Reuters