Trump vs Clinton - Debate will mark biggest moment of election 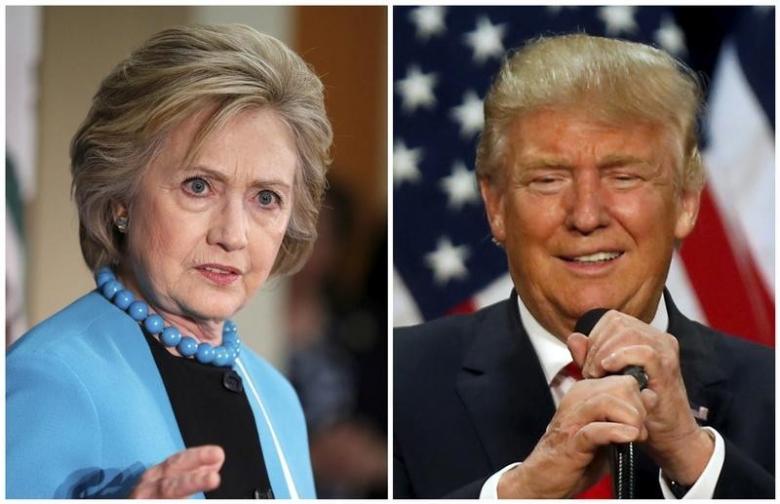 Trump vs Clinton - Debate will mark biggest moment of election

WASHINGTON - Democrat Hillary Clinton, suddenly vulnerable in the presidential race, is under pressure to deliver a strong performance against Republican Donald Trump in their first debate on Monday, a moment that could be the most consequential yet of the 2016 election. Political veterans involved in preparing for past presidential debates said Clinton should drive home how she would run the country during uncertain times and draw a contrast as the steady, experienced alternative to the untested Trump. For his part, Trump needed to show enough gravitas to convince sceptics that he is ready to be commander in chief, they said. The 90-minute face-off at Hofstra University in Hempstead, New York, the first of three debates, takes place at a time when Clinton's once-comfortable lead in opinion polls over the former reality TV star has evaporated. History shows that a single bad debate performance can alter the trajectory of a U.S. presidential race. Reuters/Ipsos polling shows about 20 percent of the electorate remains undecided, far higher at this stage in the campaign than the 12 percent undecided four years ago. "I am going to do my very best to communicate as clearly and fearlessly as I can in the face of the insults and the attacks and the bullying and the bigotry that we have seen coming from my opponent," Clinton said on Tuesday on the Steve Harvey Radio show. Anita Dunn, who helped President Barack Obama prepare for debates against Republican nominee John McCain in 2008, said Obama succeeded at their first debate by steering the conversation repeatedly back to the struggling U.S. economy even though the event was supposed to be about foreign policy. She said she expected Clinton to try to exploit Trump's weaknesses and emphasize her strengths. "The contrast between them is what you want to hone," she said. The debate will be the best opportunity for two candidates, both widely seen by voters as untrustworthy, to put to rest questions about their fitness for the White House with the Nov. 8 election fast approaching. Even the candidates' body language will be closely scrutinized, just as it has been in past elections. Brett O'Donnell, a debate coach who helped President George W. Bush in his 2004 debates and McCain in 2008, said Bush did not put in the necessary work for his first debate against Democrat John Kerry that year and it showed. Quickly put on the defensive, Bush blinked rapidly and slouched behind the lectern. Kerry was judged the winner. Bush got more serious about the debates after that, O'Donnell said. Clinton had a shaky performance at a Sept. 7 NBC "Commander in Chief" forum where she became prickly in response to questions about her handling of classified emails while serving as U.S. secretary of state. "Presentation is very important and Hillary has to work on that. Her presentation at the Commander in Chief forum was not very good. She didn’t come off as likeable. She came off as sour and defensive," O'Donnell said. TWO TRUMPS Clinton is spending most of this week in debate preparations with a small circle of top aides at her home in New York. Clinton aides said she is preparing for two scenarios: One in which Trump is measured and serious, and another in which he is freewheeling and makes inflammatory personal attacks. Trump relied on his famed spontaneity to fire off one-line zingers to dismantle 16 Republican rivals during the primaries, dispatching "low-energy" Jeb Bush or "lying Ted" Cruz and "little Marco" Rubio. He has repeatedly called Clinton "Crooked Hillary" at rallies. "You're just not sure who is going to show up,” said Jennifer Palmieri, a senior adviser to Clinton. “He may be aggressive or he may lay back. That’s hard to game out necessarily so I would say most of the focus is on what points does she want to make.” Rick Lazio, a Republican former congressman from New York, found Clinton a tough opponent when he faced her in a U.S. Senate debate in New York in 2000. He was seen as bullying, lost the debate and the election, and now says Trump will need to treat Clinton carefully. "What he has to avoid is a sense that he is name calling, highly disrespectful, badgering, anything like that," he said. -Reuters